OPEC and its allies are expected to press on with their planned revival of oil production when they meet next week, as prices bounce back from their August stumble.

The coalition led by Saudi Arabia and Russia is gradually restoring the vast amount of crude production halted during the pandemic, and will probably ratify the next monthly installment when it gathers on Sept. 1, according to a Bloomberg survey of traders and analysts. Several OPEC+ delegates privately predict the same outcome.

Crude markets faltered earlier this month as the resurgent pandemic threatened demand in China and the U.S. But prices have since recovered after fuel use proved resilient to the latest coronavirus wave, giving the Organization of Petroleum Exporting Countries and its partners more breathing space.

“Uncertainties over the world economy and the growth recovery in China have largely peeled away,” said Ed Morse, head of commodities research at Citigroup Inc. “There’s good evidence that the bottom in oil prices was temporary and overdone, and if the recovery continues, OPEC+ would likely stick to the plan.” 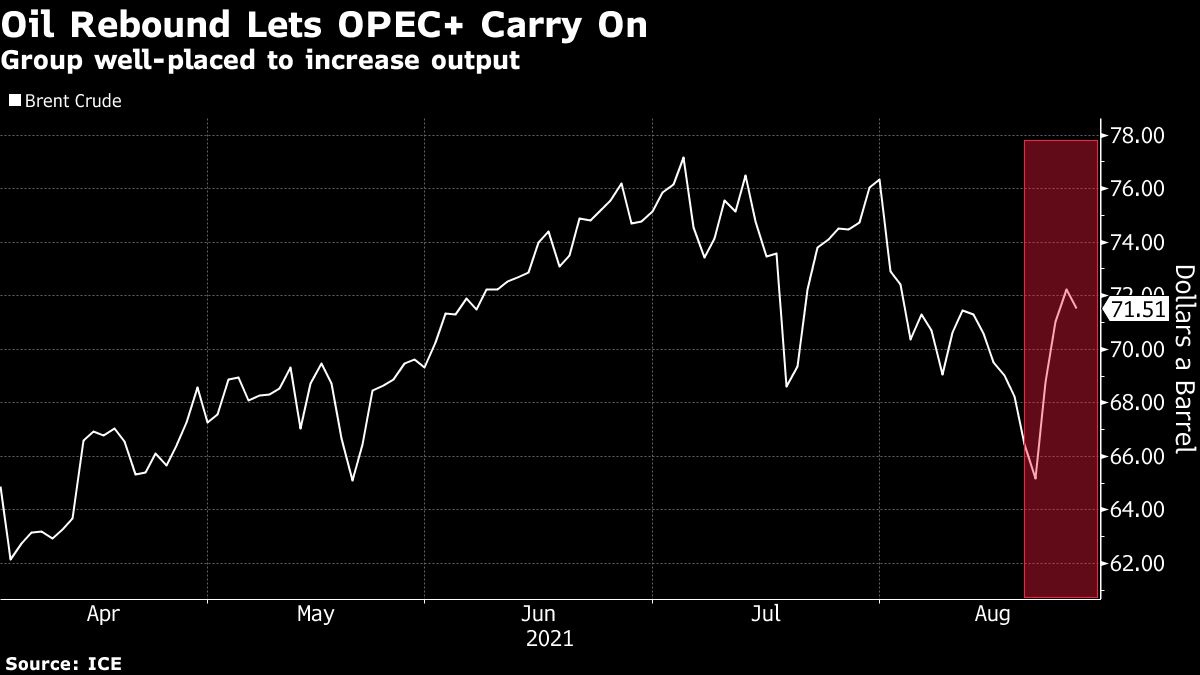 The cartel has already restarted roughly 45 per cent of the unprecedented production volume shuttered last spring. Under a plan spearheaded by Saudi Energy Minister Prince Abdulaziz bin Salman, OPEC+ will return the rest in monthly increments of 400,000 barrels a day through to late 2022.

Seventeen of 22 traders, analysts and refiners surveyed by Bloomberg expected no change to this schedule at Wednesday’s meeting, meaning October’s hike will go ahead as planned.

The OPEC+ coalition’s careful stewardship of the oil market has kept prices high enough to support the revival of the global petroleum industry, and largely avoided the kind of spike that could threaten the world’s economic recovery.

Yet the group has still faced pressure from all sides.

Earlier this month, its plans for supply increases came into question. International crude prices sank about US$11 a barrel -- roughly 15 per cent -- in the first three weeks of August as China reimposed lockdowns. The International Energy Agency, a prominent forecaster, slashed its demand outlook for the rest of the year and warned of a renewed surplus in 2022.

To the surprise of many OPEC-watchers, the group also found itself pulled in the other direction as the White House publicly urged it to revive production more quickly in order to cool elevated gasoline prices. Yet several OPEC+ nations said they didn’t hear of a direct request, and analysts concluded the President Joe Biden’s message was targeted to a domestic audience.

OPEC+ has wrong-footed observers several times this year, freezing supplies when an increase was anticipated and vice versa. But so far this meeting is on track to be a smoother affair than the previous one, allowing the 23-nation OPEC+ alliance to maintain course.

The group doesn’t face the imminent prospect of renewed supplies from Iran, as talks to lift U.S. sanctions have stalled. And oil demand appears to robust enough to absorb the extra barrels.

Traffic on China’s typically busy city streets appears to be recovering as the key crude-importing nation quashes a resurgence in COVID-19 cases. In the U.S., gasoline consumption is holding up as drivers try to make the most of the summer holiday season. Flying is even making a comeback in India as people flock to tourist spots after months of lockdown.

Brent crude futures, an international benchmark, have rebounded to US$72 a barrel, giving some respite to the battered finances of oil producers.

“As long as the Chinese government appears to have the latest COVID outbreak under control, I think they stay with the current plan and reiterate their ability and willingness to adjust as needed,” said Croft.