JPMorgan Sees Brent Around $59 Average for 2020

OPEC and its allies sent more signals that they’ll stick with their existing output cuts at their meeting next week.

As a key advisory committee in Vienna heard that the oil market will be balanced in 2020 if the Organization of Petroleum Exporting Countries maintains current production levels, industry executives in Moscow gave no indication they want to change the output agreement. Just one out of 35 analysts and traders surveyed by Bloomberg predicted deeper cuts.

Data presented in Vienna this week to the group’s Economic Commission Board, which analyzes the oil market in advance of ministerial meetings and sometimes makes policy recommendations, show that an oil-supply surplus in the first half of 2020 is mostly offset by a deficit in the last six months of the year, according to delegates.

The report drawn up for the committee by the Organization of Petroleum Exporting Countries’ secretariat didn’t examine the prospect of deeper production cuts, or consider whether to extend the current curbs beyond their expiry at the end of March, the delegates said, asking not to be named because the information isn’t public. The two-day committee meeting that concludes on Thursday is unlikely to consider deeper cuts, one delegate said. 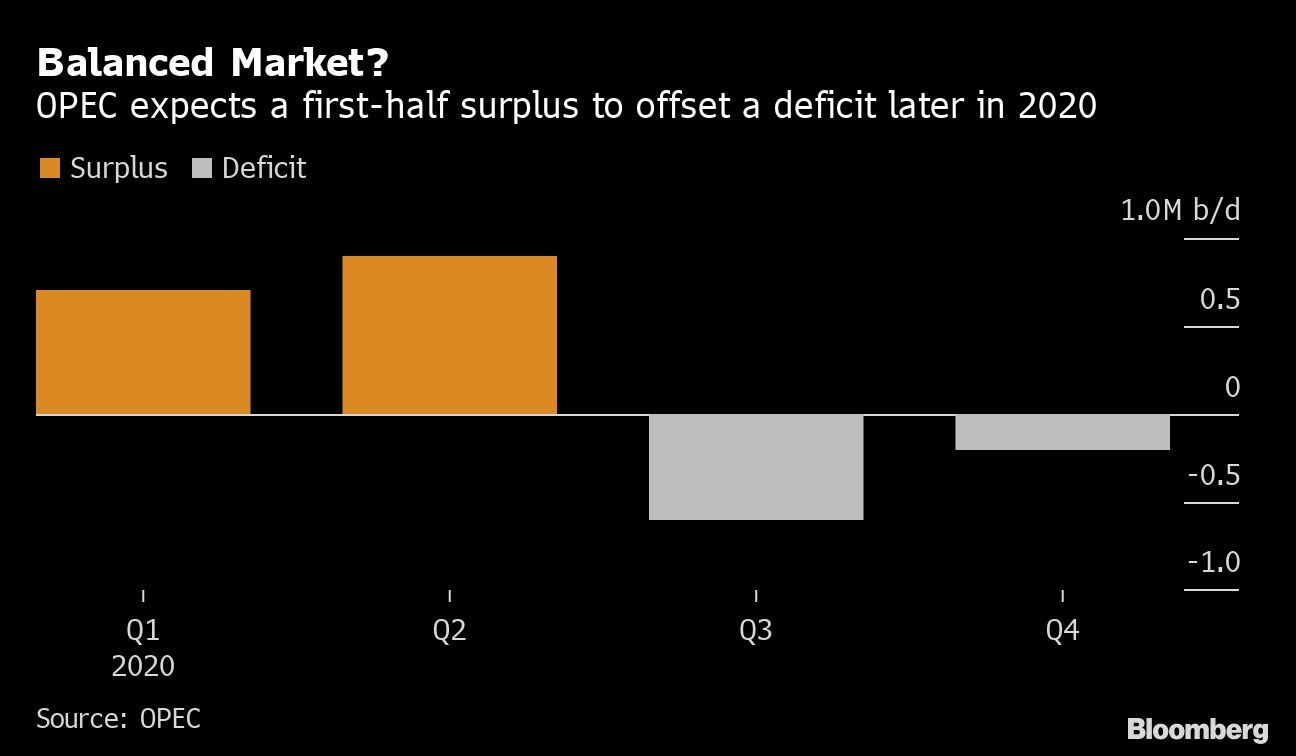 OPEC and its allies including Russia and Kazakhstan, collectively known as OPEC+, face a difficult choice when they meet in the Austrian capital on Dec. 5 to 6. The oil market is being pulled in different directions by powerful forces over which it has little control -- U.S. President Donald Trump’s trade war with China, a predicted slowdown in the American shale boom, and conflicting signals about the overall health of the global economy.

In recent weeks, OPEC’s Secretary-General Mohammad Barkindo has taken a more optimistic line, talking of “brighter spots for the 2020 outlook” and arguing that any market weakness early in the year will be fleeting. Yet if the gloomiest forecasts for demand growth combine with a rampant expansion in non-OPEC supplies, banks including Citigroup Inc. and BNP Paribas SA say prices could slump below $50 a barrel next year.

“We need deeper cuts, I just don’t know how it will be agreed,” Warren Patterson, head of commodities strategy at ING Bank NV, said on Thursday. “The level of additional cuts over the first quarter of 2020 is just too much for members to stomach I think.”

A separate meeting on Thursday in Moscow sent similar signals that OPEC+ would stay the course. After talks with Russian Energy Minister Alexander Novak, executives from oil companies including Lukoil PJSC and Russneft PJSC said they agreed to continue the current deal without changing the terms.

“Everybody proposed we remain in the deal with the same parameters, and meet again in the end of the first quarter for further discussions,” Lukoil First Vice President Ravil Maganov told reporters after the meeting.

It’s too early to say if the accord needs to be extended beyond March, said Sergey Donskoy, a board member from Irkutsk Oil Co. LLC. “Let’s not make sharp moves,” he said.

Since OPEC+ ministers typically meet to discuss policy in December and June, market watchers expect the group to agree an extension of the current deal of at least three months beyond its March expiry. In the Bloomberg survey, 20 of the 35 respondents predicted the group will decide to prolong their existing supply limits until the middle of 2020. Eight predicted a longer extension, to either September or December.

The ECB considered a number of scenarios for the oil market in 2020. The base case was for a broadly balanced market, with a gradual increase in stockpiles of 200,000 barrels a day over the course of the year, which would leave inventories in industrialized countries in line with the five-year average.