The OPEC+ alliance is set for an easy meeting this week as it cruises to the conclusion of a two-year pact on oil supplies. The respite won’t last long.

When it gathers on Wednesday and Thursday, the 23-nation group led by Saudi Arabia is expected to rubber-stamp another production increase scheduled for August, completing the reversal of vast output cuts made at the outset of the pandemic in 2020.

But in the weeks ahead, the deliberations of the Organization of Petroleum Exporting Countries and its partners will grow more complicated. They must weigh pressure to cool US$110-a-barrel prices by filling in the supply gap created by sanctions on fellow member Russia against the need to marshal their dwindling reserves of spare production capacity.

The eventual decision may hinge on next month’s visit to the kingdom by US President Joe Biden, who is reversing an initially tough diplomatic stance against Riyadh in the hope of enlisting its help in taming inflation and isolating Moscow. In the mean time, the Saudis are enjoying a spectacular revenue windfall of US$1 billion a day.

“This week’s OPEC+ virtual meeting will stick to the script and proceed as planned,” said Helima Croft, chief commodities strategist at RBC Capital Markets. “The key question is what will the group do with its remaining spare capacity given the very limited number of barrels available.” 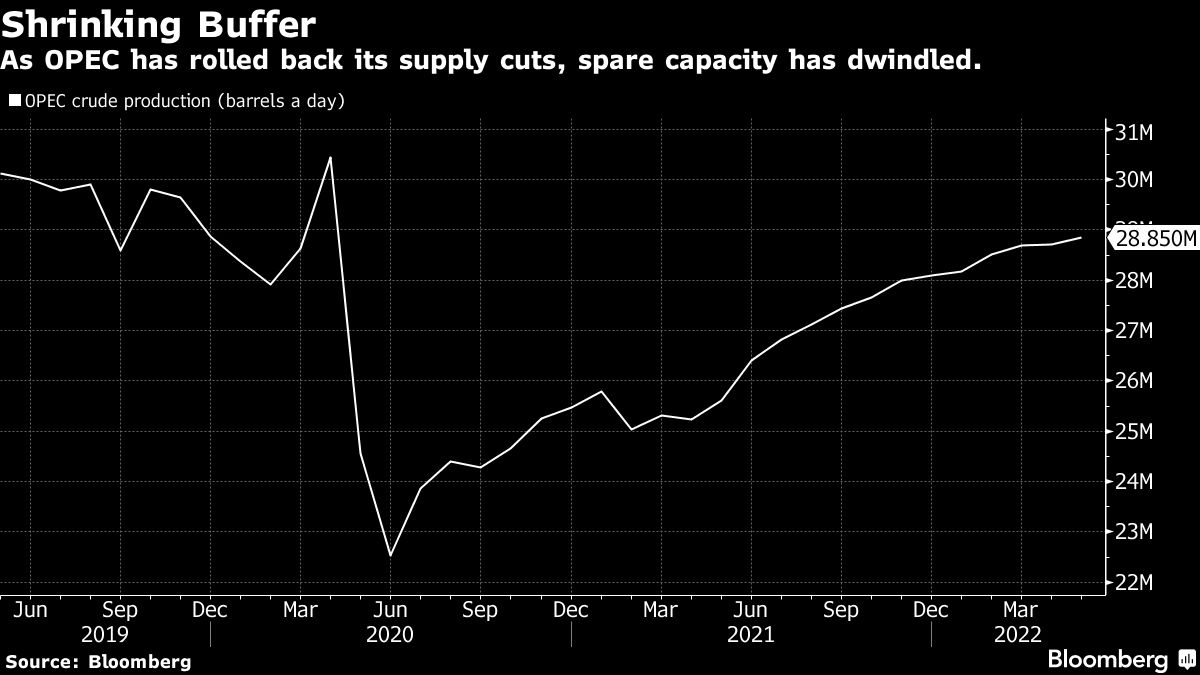 Oil prices have soared more than 60 per cent this year as crude production and refining facilities around the world fail to keep pace with the post-pandemic recovery in fuel demand. On top of that, the backlash against Russia over its invasion of Ukraine poses the biggest supply disruption in decades.

The rally is threatening to tip a fragile global economy into recession, while battering consumers with unprecedented gasoline prices, which in the US have risen above US$5 a gallon during the peak holiday driving season causing political peril for Biden.

The Saudis have shown some willingness willing to help soften the pain.

Earlier this month, the kingdom’s Energy Minister Prince Abdulaziz bin Salman steered OPEC+ to speed up the return of halted barrels, bolstering increases in July and August by 50 per cent to 680,000 barrels a day. The move, which completes the revival of 9.7 million daily barrels shuttered in spring 2020, will likely be ratified on Wednesday, according to 11 analysts and traders surveyed by Bloomberg.

The pledge of additional barrels may prove to be largely symbolic. With investment constraints preventing most members of OPEC+ from raising production, and some like Angola and Libya suffering from severe losses, analysts expect only a fraction of the promised increase will materialize.

“Whatever they decide, the reality will be that only Saudi Arabia and the United Arab Emirates will have spare capacity they can bring to market,” said Bob McNally, president of Washington-based consultant Rapidan Energy Group and a former White House official.

According to the International Energy Agency, those two Gulf nations together hold about 2.2 million barrels a day of unused capacity, or about 2 per cent of world supply. To tap that idle reserve -- and abet international efforts to punish their ally in the Kremlin -- the Persian Gulf exporters may demand political concessions in return.

Both are seeking comprehensive US security guarantees to allay their fears over regional political rival Iran. Saudi Crown Prince Mohammad bin Salman meanwhile aims to rehabilitate his international standing, having been snubbed by Biden over the 2018 killing of government critic Jamal Khashoggi.

The Saudis’ reluctance to act vigorously may only be reinforced by the threat to oil demand from the growing risk of a US recession. The possibility of extra Iranian barrels also cannot be ruled out amid renewed nuclear negotiations.

American envoys, having successfully secured the expanded supply hikes this summer, are laying the groundwork for further increments, according to people familiar with the matter. But even if the right incentives are offered, there are doubts about just how much more supply the two producers could bring to the market.

On Monday, French President Emmanuel Macron was caught on camera telling Biden at the G-7 summit that the UAE ruler, Sheikh Mohammed bin Zayed, had previously told him that Abu Dhabi is at “maximum” production and the Saudis can only increase “a little more.”

While the UAE quickly sought to clarify that “maximum” refers only to its OPEC+ quota, questions about the ultimate capability of the two exporters persist. The highest output level sustained by Saudi Arabia over the course of a month was been 11.6 million barrels a day in April 2020, according to data compiled by Bloomberg. The kingdom’s stated maximum capacity of 12.2 million barrels a day has never been tested on a long-term basis.

In any case, the combined spare capacity of the Saudis and UAE could still be eclipsed by the scale of the supply losses caused by Western sanctions on Russia, the Paris-based IEA warns.

Delving into the unused reserves could also provoke fears over how much remains left to cover further disruptions. The near-total halt of production earlier this month in OPEC member Libya because of protests, and potential shutdown of Ecuador, has served as a reminder of the industry’s perennial vulnerability.