OPEC+ is set to extend production cuts to prop up the oil market after a breakthrough in high-stakes negotiations, with the alliance meeting on Saturday to sign off on the deal.

After almost a week of wrangling, the group’s leaders Russia and Saudi Arabia clinched a tentative deal with holdout member Iraq, according to a delegate. The pair were pushing Baghdad to stop shirking its share of cuts and to compensate for past failings.

The Organization of Petroleum Exporting Countries will meet by video conference on Saturday at 1 p.m. London time, followed by a conference with their OPEC+ allies two hours later, delegates said.

The agreement, once ratified, will prolong the record OPEC+ production curbs for another month until the end of July, instead of easing them as previously planned. Ministers may review later this month whether a further extension into August is warranted, a delegate said.

Brent crude advanced as traders anticipated a tighter market in the coming months, with sentiment further buoyed by a surprise drop in the U.S. unemployment rate. The international benchmark was poised for a sixth weekly advance, rising 4.9 per cent to US$41.98 a barrel as of 2:56 p.m. in London.

“We’re reasonably optimistic on the outlook for oil in the second half of the year,” Isabelle Mateos y Lago, co-head of the official institutions group at BlackRock Inc., said in an interview with Bloomberg television. “Demand is likely to recover far more quickly than supply.”

OPEC+ is used to dramatic glitches endangering deals at the last minute, so delegates said nothing would be agreed until formal communications take place.

By accepting stricter terms, the Iraqi government risks a backlash from parliamentarians and rival political parties for acceding to foreign pressure. Still, the Oil Ministry in Baghdad said in a statement on Friday that it will comply in full with pledged OPEC+ cuts despite the country’s difficult financial circumstances.

Mexico, whose resistance to curbing output delayed the April deal, won’t cause problems this time, the delegate said. Under the terms of that accord, the Latin American country wasn’t expected to make production cuts beyond June.

But members of the 23-nation OPEC+ alliance have a lot to gain by preserving their agreement. They have helped engineer a doubling in Brent prices since April, easing pressure on their government budgets of oil-rich nations.

The accord has also revived the fortunes of major energy companies like Exxon Mobil Corp. and Royal Dutch Shell Plc, and prompted some U.S. producers to consider restarting wells just weeks after they were idled.

The deal in April set out historic cuts of 9.7 million barrels a day, or roughly 10 per cent of global oil supplies, to offset the unprecedented collapse in demand caused by the virus lockdowns. Then a few weeks later, Saudi Arabia and its closest allies in the Persian Gulf promised additional supply restraint of 1.2 million barrels a day in June.

Those reductions were set to ease to 7.7 million barrels a day from July 1. so failure to reach an agreement this month could have brought a flood of oil back onto the market and undermined a tentative recovery as countries start emerging from coronavirus lockdowns.

With American shale production starting to come back online, OPEC’s careful management of the demand recovery is crucial. 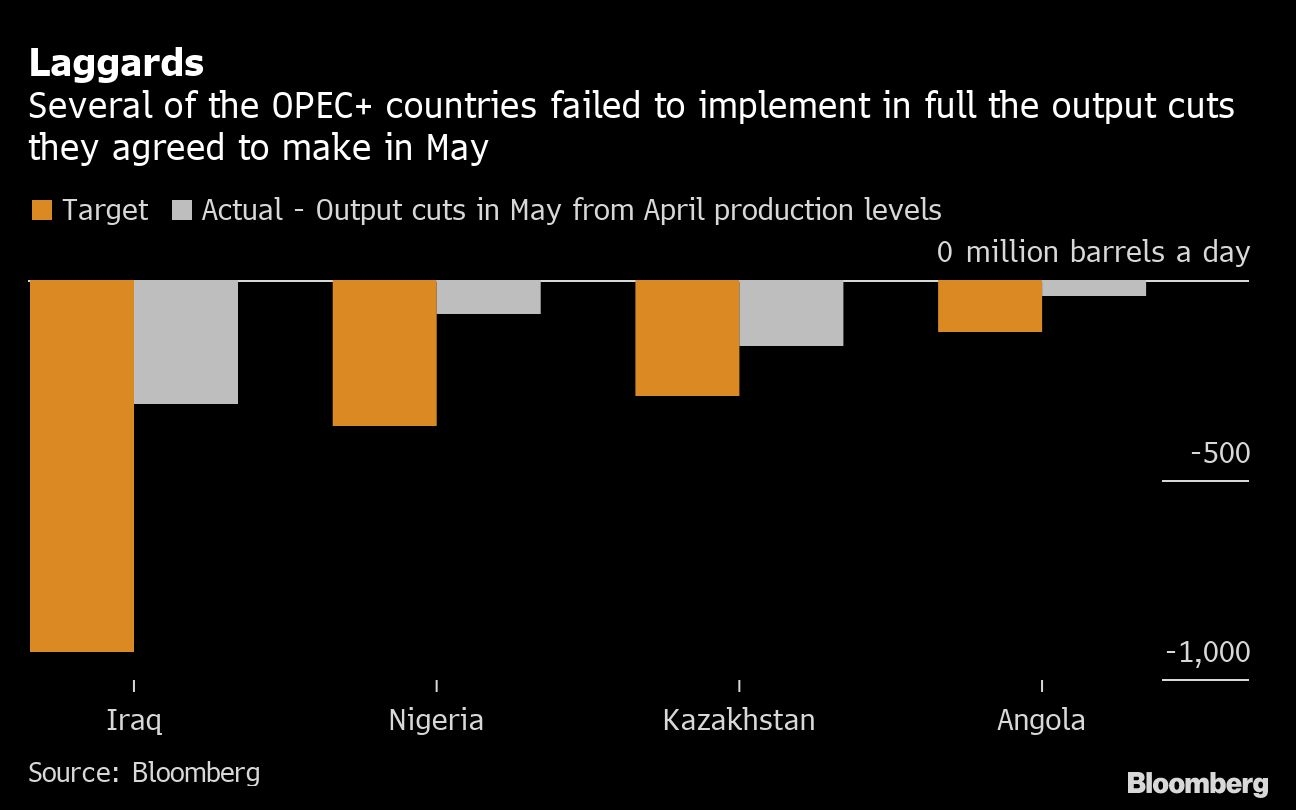 Saudi Arabia and Russia, who were on opposite sides of a vicious price war until a peace deal in April, are now united against those in OPEC+ who have consistently failed to shoulder their share of the burden. Moscow, a habitual laggard, has complied punctiliously with the historic accord brokered by President Donald Trump, and wants to make sure others do too.

“Reunited in leadership of OPEC+ and grimly facing many more months, if not years, of oversupply, Russia and Saudi Arabia had little to lose and much to gain by imposing concrete measures to improve compliance by the laggards, especially Iraq,” said Bob McNally, founder of consultant Rapidan Energy Group and a former White House official.

The details of the deal between OPEC+ and Iraq on compliance were still not clear on Friday, and the statement from Baghdad didn’t spell out whether they had agreed to compensate for overproduction in May.

Iraq made less than half of its assigned cutbacks last month, so compensating fully would require it to slash production by a further 24 per cent to about 3.28 million barrels a day, according to Bloomberg calculations. That would be a tall order. 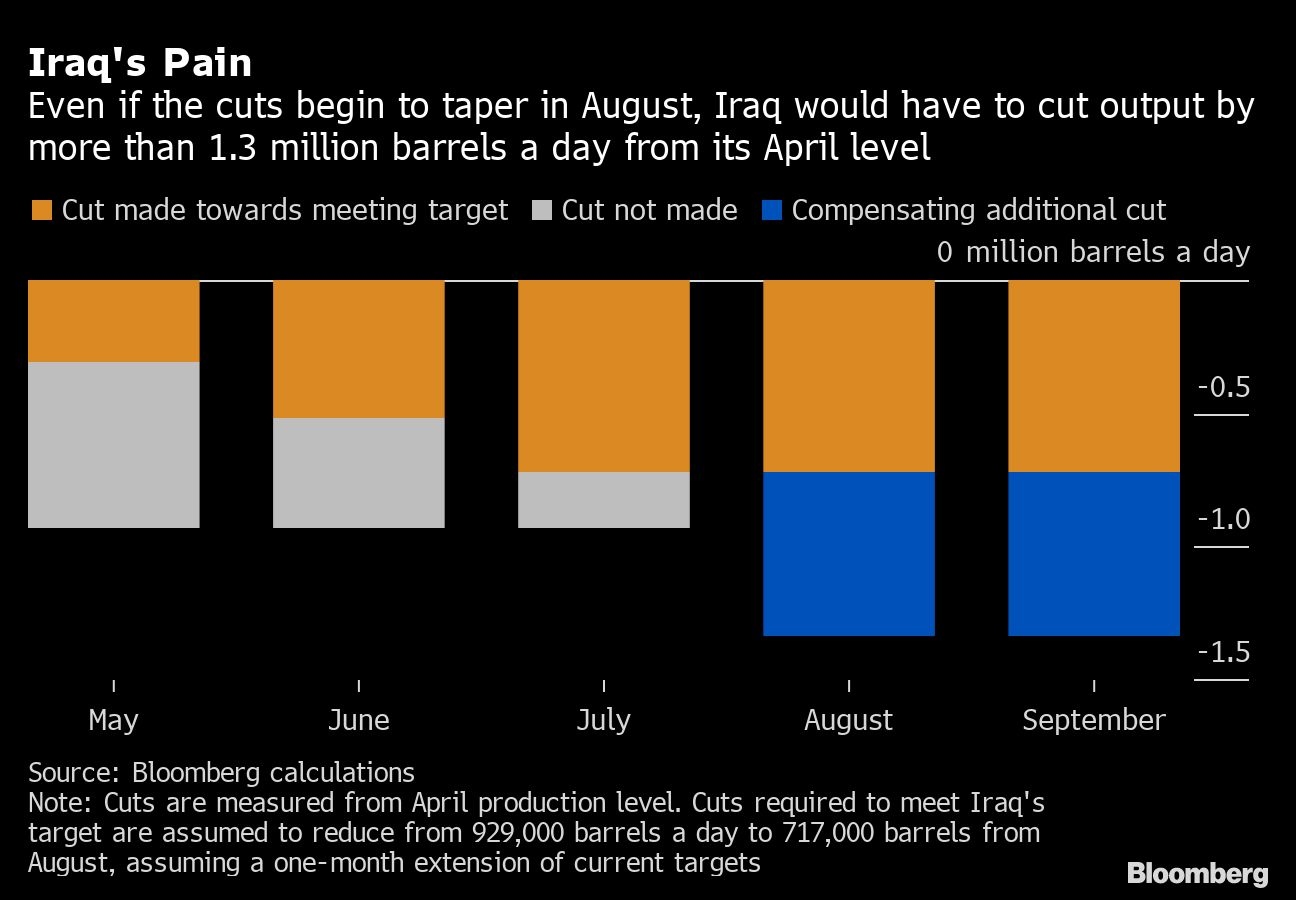 Three other nations -- Angola, Kazakhstan and Nigeria -- also produced above their OPEC+ quotas in May. The three pledged on Thursday to bring their output in line with the agreement.

By extending the cuts, the cartel wants the market to start drawing down the billion barrels of stockpiles that built up during the crisis. To force that to happen, OPEC+ intends to create an oil price structure called backwardation, with crude for immediate delivery priced higher than longer-term contracts, one delegate said.