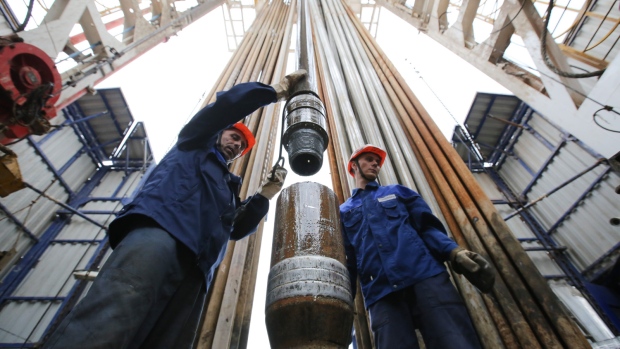 (Bloomberg) -- OPEC and its partners continued to struggle to set a date for their next meeting, leaving the market in an increasingly uncertain position just weeks before the group’s production cuts are scheduled to expire.

After talks with his Russian counterpart, Iran’s Oil Minister Bijan Namdar Zanganeh said he was willing to hold talks in July. While this marked some progress from his previous insistence that the group meet in June as originally scheduled, the minister’s preferred date was one week later than the timing proposed by other group members.

Zanganeh’s comments leave unresolved a one-month impasse that has exposed the political fissures at the heart of the Organization of Petroleum Exporting Countries. They need to agree on whether to keep restraining oil production for the rest of the year as oil demand shows signs of weakening. Failure to do so could deepen the current slump in crude prices.

Five delegates from countries in the OPEC+ alliance said they were uncertain whether Iran’s proposal would be accepted.

The request to shift the date of the meeting originated from Russia, a producer outside OPEC that has exerted a strong influence over the group since joining forces almost three years ago.

Differences over the timing began as a mere scheduling clash, but escalated rapidly into a diplomatic crisis that pitted long-standing regional rivals Saudi Arabia and Iran against each other. The dispute played out amid a broader geopolitical confrontation as the Saudis -- and the U.S. -- accused Iran of complicity in attacks on two oil tankers near the Gulf of Hormuz on June 13. Iran, which is under U.S. sanctions, denied culpability.

Algeria, like Iran, initially opposed pushing the meeting to July, saying the new date would conflict with a planned election in the North African country. The Algerians later canceled their July 4 vote, leaving Iran as the sole holdout against the rescheduled meeting.

Novak left the meeting in Tehran without speaking to reporters.

To contact the reporters on this story: Golnar Motevalli in Tehran at gmotevalli@bloomberg.net;Grant Smith in London at gsmith52@bloomberg.net

To contact the editors responsible for this story: Nayla Razzouk at nrazzouk2@bloomberg.net, Amanda Jordan, James Herron