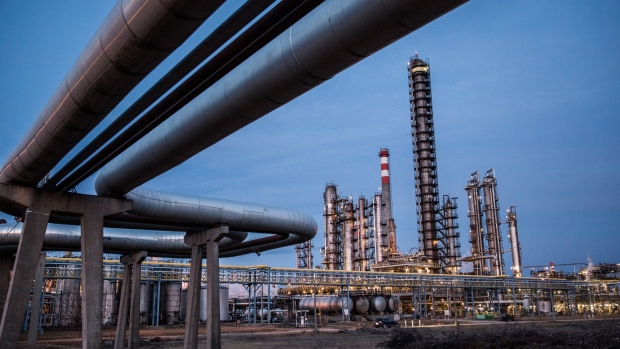 (Bloomberg) -- With just two weeks remaining before they’re supposed to gather in Vienna, OPEC and its allies are still struggling to settle on a meeting date. It’s the latest example of how bitter geopolitical rivalry between Saudi Arabia and Iran can cause gridlock in the cartel.

The Organization of Petroleum Exporting Countries and its partners, an alliance that spans 24 oil-producing nations, must choose whether to extend production cuts into the second half of the year or end a pact that has put a floor under prices. It’s a decision of growing urgency as a deteriorating global economy and entrenched trade war batter crude prices.

Yet for the past three weeks they’ve been fruitlessly juggling dates after Russia, the biggest non-OPEC producer in the coalition, sought to shift the meeting to early July. Now, as countries that initially resisted Russia’s proposal give it their support, delegates familiar with the matter say opposition comes from just one nation: Iran.

It’s almost certainly no coincidence that this intransigence comes as its longtime foe, Saudi Arabia, and other OPEC nations take the Islamic Republic’s market share while its crude exports are squeezed by U.S. sanctions.

“This seems to be about flexing muscles, marking territory,” said Helima Croft, chief commodities strategist at RBC Capital Markets in New York. “Digging lines in the sand because you can.”

Iranian crude production has tumbled to the lowest in three decades as President Donald Trump pressures the country to renegotiate an accord on its nuclear program, Bloomberg data show. Meanwhile the Saudis, a religious and political adversary of Tehran, have aided Trump by raising their own crude production.

As tensions mount, hostilities have flared in the Persian Gulf, where Saudi oil tankers and pipeline infrastructure have suffered attacks that the kingdom has blamed on Iran.

Despite the political friction, OPEC is still broadly holding together on oil-supply policy. Even though Saudi Arabia has boosted crude production, it’s still abiding by output limits agreed with the rest of the group at the end of last year, and wants these to be renewed when the cartel meets, whenever that may be.

“What’s amazing about this dispute is that it has little to do with the actual content of the agreement -- a rollover seems almost certain,” said Croft.

When Russia last month proposed changing the date of the meeting -- originally planned for June 25-26 -- because of a domestic scheduling conflict, it seemed another case of OPEC’s new ally demonstrating its influence. A previous gathering intended for April was scrapped at Moscow’s request.

Ever since the partnership between OPEC and its erstwhile competitors was struck in late 2016, Russia has typically secured beneficial terms. Saudi Arabia, OPEC’s biggest member, promptly supported Russia’s request on the change of meeting dates.

“It might look like a minor scheduling issue, but actually it’s a symptom of the shifting balance of power that’s been underway since 2016, ” said Derek Brower, a director at consultant RS Energy Group Inc. “Not just diary power, but actual pricing power is now decided by Russia and OPEC’s Gulf producers.”

Riyadh and Moscow may also prevail in the dispute over dates, which they’re seeking to push to July 3-4. Countries that initially opposed Russia’s request, such as Algeria and Nigeria, appear to have fallen in line, delegates say. Algeria dropped its objections after presidential elections in the country planned for July 4 were delayed, they said.

That just leaves Iran, which insists that the original plan to convene on June 25-26 should stand. In a letter to OPEC’s Vienna-based secretariat, the Islamic Republic cited its own schedule commitments for rejecting the date move, delegates said.

Venezuelan Oil Minister Manuel Quevedo, who this year holds OPEC’s rotating presidency, is making another attempt this week to persuade Tehran to accept the change after failing to win over Iranian Oil Minister Bijan Zanganeh, said the delegates.

What happens if he fails is unclear. A compromise of holding the meeting for OPEC members on June 25 as originally planned, and moving the gathering for non-OPEC producers to July, has been considered, delegates said.

However, OPEC’s rules require consensus for the date of a conference to be altered, and without Iran’s blessing the upcoming gathering will -- at least theoretically -- remain set for June 25.

As both Saudi Arabia and Russia now cite a conflict with commitments surrounding the Group of 20 summit in Japan taking place in late June, how they would respond if the dates aren’t amended is uncertain.

To contact the reporter on this story: Grant Smith in London at gsmith52@bloomberg.net

To contact the editors responsible for this story: James Herron at jherron9@bloomberg.net, Christopher Sell, Helen Robertson