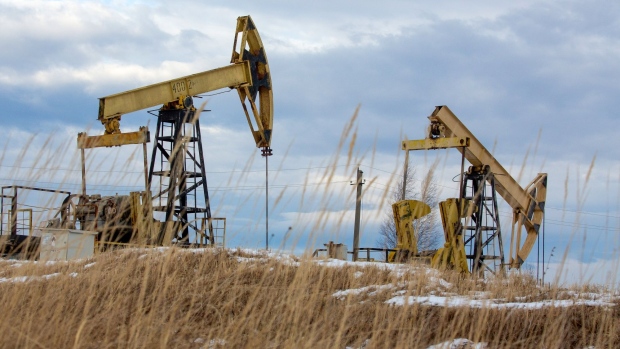 Oil pumping jacks, also known as "nodding donkeys", at a Rosneft Oil Co. oilfield near Sokolovka village, in the Udmurt Republic, Russia, on Friday, Nov. 20, 2020. The flaring coronavirus outbreak will be a key issue for OPEC+ when it meets at the end of the month to decide on whether to delay a planned easing of cuts early next year. Photographer: Andrey Rudakov/Bloomberg , Bloomberg

(Bloomberg) -- OPEC+ will react faster to changes and take a more hands-on approach with the oil market, thanks to its accelerated schedule of monthly meetings, said the group’s leaders Russia and Saudi Arabia.

“We are meeting monthly because we believe that the market is still not recovered and is still extremely volatile,” Novak said. “We need to adopt a hands-on approach and be able to react faster.”

After a difficult round of talks in early December, the Organization of Petroleum Exporting Countries and its allies agreed to meet every month, a significant acceleration of their typical bi-annual schedule. The next meeting is on Jan. 4, when they will consider whether to add as much as 500,000 barrels a day of production to the market.

The ministers from Saudi Arabia and Russia, who lead OPEC+, reaffirmed their commitment to the group and its production cuts. Economic ties between the two countries were expanding, with growing bilateral trade and joint investments from their sovereign wealth funds.

“We are on the same page in our commitment” to making sure the oil market is stable, said Prince Abdulaziz. The face-to-face talks in Riyadh, which will be followed by another meeting in March, were a step toward a firmer relationship, Novak said.