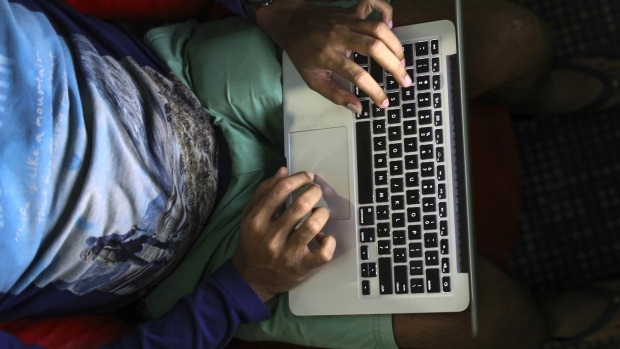 An employee is illuminated by the screen of an Apple Inc. laptop computer as he works at Flock's office in Mumbai, India. , Photographer: Dhiraj Singh/Bloomberg

Open Text is speaking to potential advisers about whether to make an offer, said the people, who asked not to be identified because the matter is private. No final decisions have been made and Open Text could opt to not proceed with an offer, they said.

Open Text “notes the recent press speculation and confirms that it is not considering a potential acquisition of Micro Focus,” it said in a statement late Friday.

Micro Focus, whose shares have fallen 35 per cent this year in London, cut its full-year revenue forecast in August and said it was accelerating a strategic review of its operations.

As part of the review, Micro Focus is open to options ranging from partial sale to full takeover, the people said. Any deal for the company would be challenging for a buyer because of its nearly US$5 billion of debt and declining growth prospects, they said.

Micro Focus has built a business model on acquiring legacy software assets and squeezing out costs. Last year, the company agreed to sell its infrastructure software business SUSE to private equity firm EQT Partners AB for US$2.54 billion in cash.

Micro Focus agreed in 2016 to merge with Hewlett Packard Enterprise Co.’s non-core software assets in a deal worth US$8.8 billion.