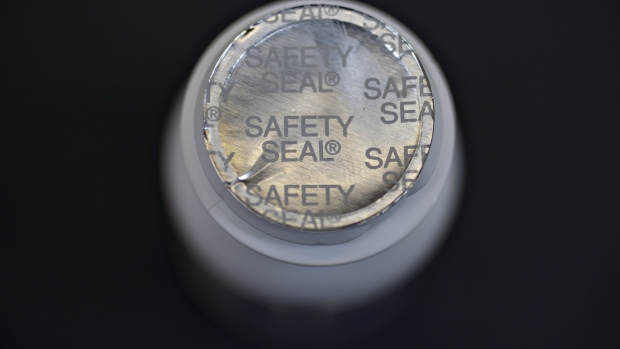 A safety seal covering the top of a recalled bottle of St. Joseph's Aspirin tablets, lot AMM365, distributed by the McNeil Consumer Healthcare division of Johnson & Johnson, is displayed for a photograph in New York, U.S., on Friday, Jan. 15, 2010. , Bloomberg News

Federal prosecutors are investigating the role that at least six drugmakers and distributors played in the flow of opioids into cities and towns across the U.S., the latest turn in the crisis that has ensnared dozens of companies around the world.

Pharma companies Johnson & Johnson, Teva Pharmaceutical Industries Ltd., Amneal Pharmaceuticals Inc. and Mallinckrodt Plc along with drug distributors AmerisourceBergen Corp. and McKesson Corp. have all recently said in filings that they received grand-jury subpoenas from the U.S. Attorney’s Office in the Eastern District of New York.

U.S. prosecutors in Brooklyn are looking into whether companies violated the Controlled Substances Act, which regulates how companies manufacture, import, possess and distribute certain substances that have the potential for abuse, including opioid painkillers, according to the filings.

John Marzulli, a spokesman for the U.S. Attorney’s office, declined to comment.

Shares of all the companies declined on Tuesday in New York after the Wall Street Journal reported on the filings. Israel-based Teva fell as much as 7.1 per cent Wednesday in Tel Aviv. Its 1 billion euros (US$1.1 billion) of 2025 notes, issued last week, declined 1.5 cents on the euro to 103 cents, the first setback since their public trading debut, according to data compiled by Bloomberg.

Johnson & Johnson received a grand jury subpoena from the Eastern District of New York in August, the company said in a securities filing last month. It also received subpoenas from the New York State Department of Financial Services in September, the filing said.

The New Brunswick, New Jersey-based company’s pharmaceutical unit Janssen said in a statement that its opioids were rarely diverted or abused.

“Janssen believes that at all times its anti-diversion policies and procedures for distribution of its opioid medications complied with the law,” company spokesman Jake Sargent said in the statement. “In fact, monitoring data shows that the company’s opioids were rarely diverted or abused.”

Holly Weiss, a spokeswoman for McKesson, said the company had disclosed its receipt of a subpoena in its most recent quarterly filling with the Securities and Exchange Commission in October.

“There have been no additional developments,” said Weiss.

Teva spokeswoman Kelley Dougherty said the drugmaker is cooperating with the subpoena, which it disclosed previously in its public filings.

Representatives for Amneal and AmerisourceBergen didn’t immediately respond to requests for comment.

States, cities and counties have sued opioid makers and the distributors that deliver the majority of prescription medications to U.S. pharmacies, saying the companies downplayed opioids’ health risks and oversold their benefits through hyperaggressive marketing campaigns.

--With assistance from Katie Linsell