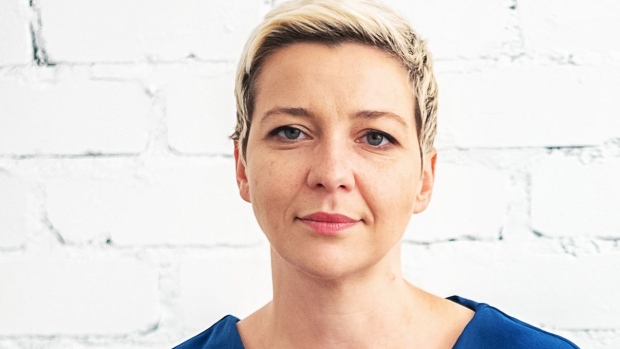 (Bloomberg) -- An opposition leader who ripped up her passport to stop officials expelling her from Belarus goes on trial Wednesday as President Alexander Lukashenko steps up his campaign to crush dissent ahead of the first anniversary of disputed elections.

Maria Kalesnikava, a flute player who became one of the public faces of the effort to defeat Lukashenko at last year’s Aug. 9 elections, faces as much as 12 years in prison at the closed-court trial. She and Maksim Znak, a lawyer and fellow opposition activist, are charged with public calls to harm national security, conspiracy to seize power and organizing an extremist group.

“Don’t trust, don’t be afraid, don’t plead, and laugh -- that’s my principle for communicating with them,” Kalesnikava said of Belarusian authorities in an interview from detention published Wednesday by Russia’s TV Rain channel. She said she’d rejected officials’ attempts to get her to take part in staged interviews with state television or plead for clemency because she’s innocent.

Details of the trial were announced on social media by the campaign team of former banker Viktor Babariko, who was jailed for 14 years last month on charges of bribery and money-laundering that he denied. Babariko was arrested soon after announcing he planned to challenge Lukashenko at the elections, prompting members of his campaign including Kalesnikava and Znak to join forces with opposition challenger Sviatlana Tsikhanouskaya.

With backing from Russia, Lukashenko has defied all criticism of his determination to cling to power. He provoked international outrage in May when he ordered a Ryanair flight crossing Belarusian airspace to land in Minsk and security forces detained an opposition journalist and his girlfriend who were on board.

Lukashenko has also triggered an immigration crisis in neighboring Lithuania, where authorities say nearly 4,000 people, many from Middle East countries, have crossed into the European Union state from Belarus this year.

In exile since the election, Tsikhanouskaya met U.S. President Joe Biden at the White House last week and has also gained backing from European leaders. She held talks with U.K. Prime Minister Boris Johnson in London Tuesday. The U.S., the EU and the U.K. reject Lukashenko’s claim that he won the election with 80% to extend his 26-year rule, and have sanctioned his regime over violent police attacks on demonstrators and alleged widespread torture of detainees in prisons.

More than 30,000 have been arrested and at least 4,600 criminal cases opened against protesters called “extremists” by Belarusian authorities.

Belarusian sprinter Krystsina Tsimanouskaya, who said she feared being sent to jail after she was pressured to leave Tokyo halfway through the Olympic Games for criticizing sports officials from her country, departed Japan on a flight bound for Europe Wednesday after receiving a humanitarian visa from Poland.

Meanwhile, police in Ukraine are investigating the death of Belarusian opposition activist Vitaliy Shishov, who was found hanged in a Kyiv park on Tuesday.

Kalesnikava was detained in September after being brought forcibly to the border with Ukraine by Belarusian security forces. She destroyed her passport and climbed out of the window of the vehicle to prevent the agents from expelling her, according to two colleagues who fled.

Lukashenko told Russian media she was arrested after trying to flee Belarus illegally during the night.

While Lukashenko has largely suppressed street protests, the situation hasn’t stabilized, according to Artyom Shraibman, a Kyiv-based nonresident scholar at Moscow Carnegie Center.

“His chances of getting back lost approval ratings have evaporated,” said Shraibman, who left Belarus for Ukraine in June.