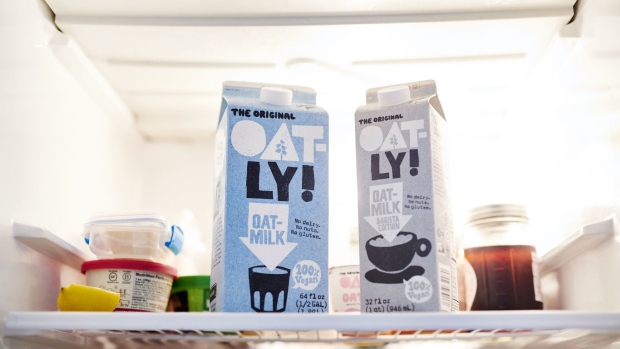 Cartons of Oatly brand oat milk are arranged for a photograph in the Brooklyn borough of New York, U.S., on Wednesday, Sept. 16, 2020. Oatly AB is considering an initial public offering that could value the Swedish maker of vegan food and drink products at as much as $5 billion, according to people with knowledge of the matter. , Bloomberg

(Bloomberg) -- Oatly AB, the vegan food and drink maker backed by celebrity entrepreneurs Oprah Winfrey and Jay-Z, has confidentially filed for an initial public offering in the U.S.

Malmo, Sweden-based Oatly announced the move in a statement Tuesday. The IPO will take place once the U.S. Securities and Exchange Commission has completed a review process, Oatly said.

The company gave no further details on the size or pricing of the planned share sale. Bloomberg reported this month that Oatly is considering seeking a value of around $10 billion in the listing.

Oatly was founded in the 1990s by brothers Rickard and Bjorn Oste. Using technology based on research from Sweden’s Lund University, the company turns fiber-rich oats into liquid food. Its products continue to attract a following among latte drinkers from New York to Shanghai, thanks to frothing qualities that emulate dairy milk.

Last year, the company raised $200 million in funding from backers including Blackstone Group Inc. and Winfrey. The funding round valued Oatly at roughly $2 billion.