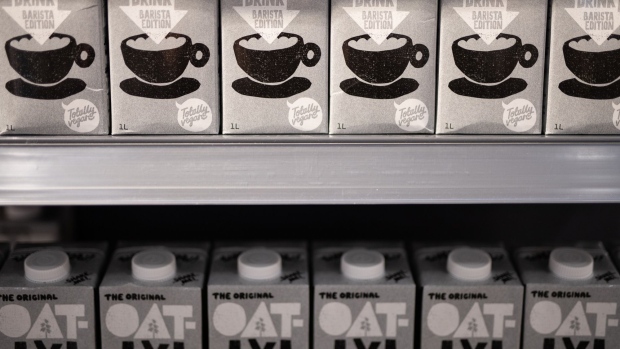 LONDON, ENGLAND - JANUARY 03: Cartons of vegan dairy-free oat milk are seen in a branch of the Planet Organic healthfood store on January 03, 2020 in London, England. Veganuary, a campaign launched in the UK in 2014, encourages people to "try vegan for January and beyond." The campaign organizers said that more than 250,000 people pledged to go Vegan last year, up from 160,000 the year before. Veganism and vegetarianism are on the rise in the UK, with consumers citing a variety of reasons, from personal health to environmental concerns. (Photo by Leon Neal/Getty Images) , Photographer: Leon Neal/Getty Images Europe

Oatly AB is considering an initial public offering that could value the Swedish maker of vegan food and drink products at as much as US$5 billion, according to people with knowledge of the matter.

Malmo-based Oatly has held talks with advisers about a U.S. listing in the first half of 2021, the people said, asking not to be identified as the information is private. Oatly has also considered Hong Kong as a listing venue, the people said.

No final decision has been made and the company could decide against an IPO, the people said. A representative for Oatly declined to comment.

Using technology based on research from Sweden’s Lund University, Oatly turns fiber-rich oats into liquid food including ice cream and milk and sells its products in 20 countries. Under Chief Executive Officer Tony Petersson, it is looking to hire for expansion in existing markets in Europe, the U.S. and Asia.

In July, the company secured US$200 million in new capital from investors led by Blackstone Group Inc. and celebrities including Oprah Winfrey, Jay-Z and Natalie Portman. This valued it at US$2 billion. A representative for Blackstone declined to comment.

The popularity of the company’s flagship oat milks echoes the move of other plant-based products into the mainstream, a trend that has drawn investor attention. Vital Farms Inc., which sells free range eggs and butter and ghee, has seen its shares rise more than 68 per cent since listing on the Nasdaq Global Select Market in July.

Spikes in demand for more ethical food has forced the companies making them to quickly figure out how to mass-manufacture. Last year, Oatly opened a US$15 million U.S. processing plant in Millville, New Jersey. The factory produces about 750,000 gallons of oat base -- a thick, lightly sweet liquid that’s the main ingredient in all of its products -- on a monthly basis, Bloomberg News has reported.