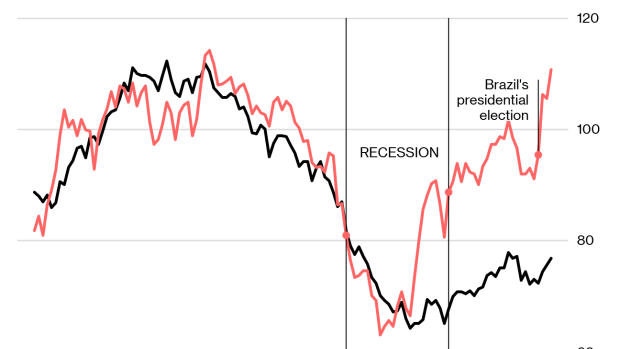 (Bloomberg) -- The real estate developer wouldn’t open its doors for another three hours, but already people were lined up to buy yet-to-be-built apartments in a middle-class neighborhood of Rio de Janeiro.

Marcelo Parreira, head of new products at RJZ Cyrela, felt relieved. Pre-dawn lines were unseen since Brazil sank into a deep recession in 2015, and that late-August launch was the company’s first since. Brazilians were turning more upbeat about the future with Jair Bolsonaro on his way toward winning the presidential election. Within a month, the company pre-sold all 176 units.

The sale “gave optimism to the company, and to the entire real-estate market,’’ Parreira said. “There were people with money who were just paralyzed, waiting for the confidence to invest.’’

As is often the case after elections, sentiment jumped even more once Bolsonaro secured victory in October. Consumer optimism reached a 6-1/2-year high by January, according to an index from the Getulio Vargas Foundation.

Yet the gap has never been wider between expectations and current economic conditions, including the job market and family finances. That means Brazilians may be in for a reality check, particularly if Bolsonaro fails to deliver reforms needed to boost the country’s anemic recovery.

While consumer expectations are a traditional driver of growth, troubling signs for the recovery abound. Unemployment stopped falling in the fourth quarter, retail sales dropped 2.2 percent in December from the prior month, and January car production plunged 10 percent from the year before. Itau Unibanco SA cut its 2019 GDP forecast for Brazil by a half percentage point to 2 percent.

“There’s a certain wave of optimism that goes beyond economics and has a subjective component, disconnected from real life,’’ said Aloisio Campelo Jr., public statistics superintendent for FGV’s economics institute. “After such a big crisis there is perhaps some wishful thinking on the part of the consumer.’’

Even with the benchmark interest rate at an all-time low, Latin America’s largest economy is still held back by a stubbornly-high unemployment rate of 11.6 percent.

Formal jobs in the construction sector, one of the country’s top employers, have fallen some 40 percent since 2014 to 2 million. They won’t reach pre-crisis levels before 2021, and only if lawmakers approve the controversial pension reform Bolsonaro will send to Congress this week, said Jose Carlos Martins, president of construction industry chamber CBIC.

The reform is needed to support confidence and provide the government with the financial relief to spur both private and public investment. For now, a pall hangs over the infrastructure sector after the so-called Carwash investigation revealed vast corruption and put leaders of the country’s largest construction firms and top politicians behind bars. Bolsonaro’s pledge to root out corruption won’t benefit the economy overnight, which may disappoint his hopeful supporters, said Bloomberg economist Adriana Dupita.

One of the most visible symbols of the decay in public finances stands right in front of Rio’s world-famous Copacabana beach. A museum designed to immerse visitors in the city’s rich musical culture, from Carmen Miranda to Carnival, was supposed to be ready before the 2016 Olympics. The 296 million-real ($79 million) project was 70 percent finished when coffers ran dry and the state’s self-declared “fiscal calamity’’ prevented it from receiving financing from the Inter-American Development Bank.

Its beachfront façade of slanted concrete and glass now looms over a courtyard of shoulder-high weeds and detritus. Antonio Scherres, 62, a worker doing some cleaning at the construction site, has been lucky to keep his job while so many others, including his son who did maintenance at oil giant Petrobras’ headquarters, got laid off.

“A lot of heads of families are looking for jobs, and there are none,’’ he said. “Let’s see if it improves now with the new president.’’

As consumer demand slowly returns, RJZ’s parent company Cyrela plans to launch seven developments in Rio this year. That’s just one-third the number of new projects in 2014, before the recession started. Builders, who were first to plunge into crisis and will be last to emerge, still have units to sell and need consumers to feel more secure before building new ones, said Ricardo Carvalho, Fitch Ratings’ managing director for corporates in Brazil.

“When you’re in crisis and start seeing more work stability, you buy a slightly better brand of beer, but you don’t go out and buy an apartment,’’ Carvalho said in his office in Rio’s downtown port area -- the site of an intended real-estate boom. “You need the certainty to envision yourself employed in five years.’’

To contact the reporter on this story: David Biller in Rio de Janeiro at dbiller1@bloomberg.net

To contact the editors responsible for this story: Daniel Cancel at dcancel@bloomberg.net, Walter Brandimarte