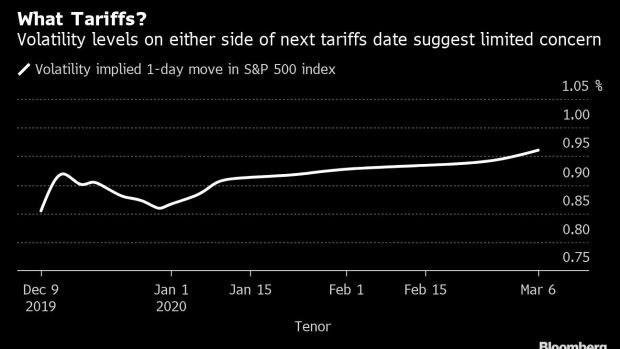 (Bloomberg) -- The underbelly of stock and bond markets is where investors would be busy prepping for an upcoming deadline in the U.S-China trade war. Right now they’re as cool as ice.

If those steely nerves persist, it suggests markets are betting that Dec. 15 will pass without fireworks, or that a repricing is nigh.

S&P 500 options show relatively little in the way of an expected jump in volatility two weeks from now -- when President Donald Trump could add more tariffs on Chinese imports. Contracts on the U.S. benchmark expiring Dec. 9 imply a daily move of around 0.85%, not far from those expiring on Dec. 13, Dec. 16 and Dec. 20.

The S&P 500 itself sold off the most in eight weeks Monday after Trump slapped steel tariffs on Brazil and Argentina, and proposed new levies on France. China hinted that a blacklist of U.S. companies was imminent as part of a tit-for-tat about human rights issues in Hong Kong and Xinjiang.

Trump rattled markets again on Tuesday when he signaled he would be willing to wait for another year before striking a trade agreement with China, casting doubt on the likelihood of a phase-one accord within weeks.

Judging by options markets though, there’s been little in the way of panic among derivatives traders.

“It feels like we’re heading toward year-end, where people may be betting there’s no need to overinsure against a one- or two-week event,” Geoffrey Yu, head of the U.K. investment office at UBS Wealth Management, said ahead of Trump’s remarks today casting doubt on an imminent deal. “The standard M.O. on trade is that nothing is constant.”

Traders of fixed-income derivatives also appear unruffled. Implied volatility on 10-year bond futures -- a gauge of how much an asset is expected to move -- is flat between the one- and two-week tenors, despite the latter capturing the Dec. 15 tariff date.

While Wells Fargo’s Pravit Chintawongvanich sees an “apparent vol premium” in S&P 500 options during the week surrounding the tariff deadline, one explanation could be merely the low levels of volatility during the shortened holiday week following, he wrote in a note.

Not all derivatives markets are flashing the all-clear. Implied swings over the next two weeks in USD/CNH are trading at higher levels than the same measure for the 1- and 3-month windows, suggesting that currency traders may be bracing for sparks.

The lack of fear in stock options represents opportunity to UBS strategist Stuart Kaiser, who flags that the trade deadline “looms large” in the calendar along with the Federal Open Market Committee meeting on Dec. 11 and the European Central Bank gathering Dec. 13.

“A corrective pullback would, in fact, be healthy,” says Jeffrey Halley, senior market strategist for Asia Pacific at Oanda Asia Pacific Pte. “It does not imply we are at the beginning of the end.”

--With assistance from David Ingles, Edward Bolingbroke and Luke Kawa.

To contact the reporters on this story: Joanna Ossinger in Singapore at jossinger@bloomberg.net;Stephen Spratt in Hong Kong at sspratt3@bloomberg.net

To contact the editors responsible for this story: Christopher Anstey at canstey@bloomberg.net, Yakob Peterseil, Sid Verma