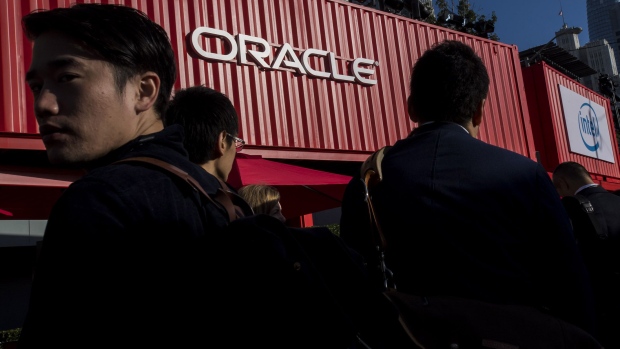 Attendees wait in line to enter the Moscone Center North building during the Oracle OpenWorld 2017 conference in San Francisco, California, U.S., on Tuesday, Oct. 3, 2017. Oracle Corp. plans to pay its leaders more than $100 million each in fiscal 2018, an increase of about 150 percent, as it rips a page from Tesla Inc.\'s playbook to change its executive-compensation practices in response to investor complaints. Photographer: David Paul Morris/Bloomberg , Photographer: David Paul Morris/Bloomberg

Oracle Corp. shares declined after the software maker reported quarterly sales that failed to satisfy robust investor expectations for the company’s cloud-computing business and gave a profit forecast that fell short of projections.

Earnings, excluding some items, will be 94 cents to 98 cents a share in the quarter ending in August, Chief Executive Officer Safra Catz said Tuesday on a conference call. Analysts, on average, projected US$1.03 per share, according to data compiled by Bloomberg. Catz said the numbers were “a result of the increased investment in the cloud.”

Revenue in the period that ended May 31 increased 7.5 per cent to US$11.2 billion, compared with analysts’ average estimate of US$11 billion. Profit, excluding some items, was US$1.54 a share, the Austin, Texas-based company said in a statement. Analysts estimated US$1.31.

Investors have bid up Oracle stock 26 per cent this year on enthusiasm for cloud computing as Catz and Executive Chairman Larry Ellison have tried to boost revenue by focusing on that area. But the company lags far behind market leader Amazon.com Inc. and rivals Microsoft Corp. and Alphabet Inc.’s Google in sales of cloud infrastructure. Oracle’s revenue growth in the quarter fell short of what some shareholders hoped to see.

“They’re getting better in cloud. But they lumped it all together and call everything cloud,” Dan Morgan, senior portfolio manager at Synovus Trust Co., said before the results were released. “So we can’t even hang our hat on, ‘OK the cloud business is growing at a faster rate even if database growth is like 3 per cent.”

Shares, which had declined in extended trading after the results, fell further to about 5 per cent on the forecast. Oracle’s stock closed at US$81.64 in New York and this year has almost doubled the increase in the S&P 500 Index.

Revenue from cloud services and license support increased 8 per cent to US$7.4 billion in the fiscal fourth quarter, just topping analysts’ estimates of US$7.3 billion. That metric includes sales from hosting customers’ data in the cloud, but a large portion is generated by maintenance fees for traditional software kept on clients’ corporate servers.

Catz projected revenue would increase 3 per cent to 5 per cent in the fiscal first quarter and said she expects fiscal year 2022 sales growth to top the 3.6 per cent gain in the 12 months that just ended. To advance further in cloud computing, Oracle will expand spending on data centers, doubling capital expenditures to almost US$4 billion, she said.

“We are going to invest back in the business at a greater rate,” Catz said. Cloud, she said, will be “fundamentally a more profitable business” compared with selling traditional on-premise software that customers run at their office sites. Other companies, including Microsoft, saw the shift to the cloud result in a hit to profitability, at least for the first few years. Amazon, Microsoft and Google have also spent billions to build a global network of cloud data centers.

Oracle said quarterly sales of its Fusion application for managing corporate finances rose 46 per cent -- compared with 30 per cent growth reported in the previous period. Revenue from NetSuite’s financial software, targeted to small- and mid-sized businesses, rose 26 per cent, after a 24 per cent gain in the fiscal third quarter.