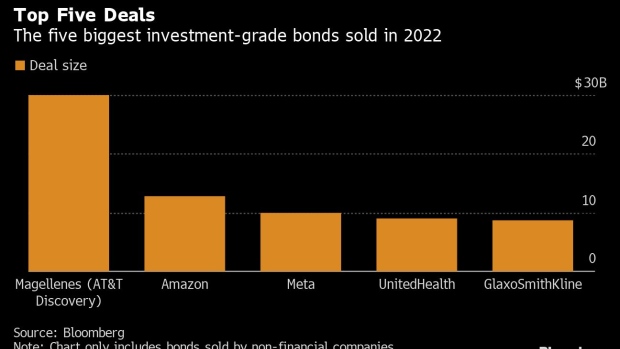 Signage is displayed on a building at the Oracle Corp. headquarters campus in Redwood City, California, U.S., on Monday, March 14, 2016. , Bloomberg

(Bloomberg) -- Oracle Corp. is the latest company to seize the moment in a credit market recovery, bringing a $7 billion bond sale to help fund its acquisition of medical-records systems provider Cerner Corp.

The software-maker sold bonds in as many as four parts, according to a person with knowledge of the matter. The longest portion of the offering, a 30-year note, yields 2.55 percentage points above Treasuries after earlier discussions of about 3.1 percentage points, said the person, who asked not to be identified as the details are private.

Oracle announced, along with the bond sale, that it also increased its previous $4.4 billion term loan by $1.3 billion. The added proceeds will help pay down a bridge loan used to fund the acquisition of Cerner, according to a filing.

The Cerner acquisition was originally funded with about $15.7 billion of so-called bridge loan debt provided by a group of banks. Such debt is typically refinanced into longer-term bonds and loans. Oracle later borrowed about $4.4 billion through a term loan agreement, using that to reduce the bridge facility.

Austin, Texas-based Oracle originally agreed to buy Cerner for $28 billion in December, in an all-cash deal that would broaden its customer base within the health-care industry and bolster its cloud-computing and database businesses.

“Today’s Oracle deal has been anticipated for months, and we expect healthy participation from the buyside even though it’s a company that has been remarkably inattentive to maintaining its credit rating profile,” said Baylor Lancaster-Samuel, vice president of fixed income at Amerant Investments Inc., in an emailed response to questions.

“As recently as 2020, Oracle was rated high A and with the Cerner deal, there was some threat that Oracle could flirt with a BBB- rating at the lowest rung of investment grade,” she said.

Fitch Ratings downgraded Oracle to BBB from BBB+ on Monday. It assigned a BBB score to the new unsecured notes, as did S&P Global Ratings.

Oracle is one of 15 companies that sold investment-grade debt on Monday, marking the busiest day in that market by number of deals since the days following Labor Day in September.

Firms have been taking advantage of the ease in credit market volatility in recent weeks to launch new deals. Last week, several banks used the window to offload some of their most risky buyout and acquisition debt.