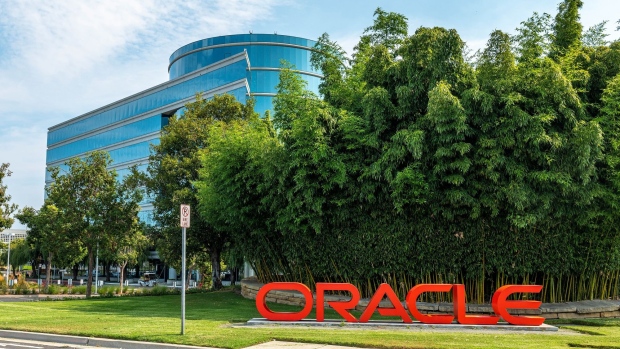 Signage is displayed outside the Oracle Corp. headquarters campus in Redwood City, California, U.S., on Tuesday, Aug. 18, 2020. Oracle Corp., the world's second-largest software maker, is weighing a surprise bid for part of TikTok's business, seeking to rival Microsoft Corp. in the race to acquire the viral video streaming app, according to people familiar with the matter. , Bloomberg

Oracle Corp. said it has moved its headquarters to Texas, from its home state of California to give employees more flexibility on where they do their jobs.

The move to Austin from Redwood City “means that many of our employees can choose their office location as well as continue to work from home part time or all of the time,” Oracle said Friday in a regulatory filing. The company will continue “to support” its other U.S. office locations in Santa Monica, California, Seattle, Denver, Orlando and Burlington, Massachusetts, according to the filing.

The spread of the coronavirus has prompted many companies to give staffers flexible arrangements, including the ability to work from home. The software maker said it had 135,000 employees as of the end of May. Some companies, executives and employees are ditching California because of concerns over the state’s tax rates and high cost of living, as well as arduous commutes in some locales.

Oracle’s shift of resources away from California dates at least to 2018, led by Chairman Larry Ellison and the late co-Chief Executive Officer Mark Hurd. That year, Oracle opened a campus in Austin, featuring an on-site apartment building for employees, in an effort to recruit a younger and less costly workforce. The campus could eventually host 10,000 staffers, Oracle said at the time.

Started in 1977, Oracle has been a foundational company in Silicon Valley and its silver-blue cylindrical buildings in Redwood City, visible from U.S. Highway 101, are the rare landmark in the otherwise sprawling region. It follows other tech innovators in de-emphasizing their California roots. Server maker Hewlett Packard Enterprise Co. said Dec. 1 that it would move headquarters to a Houston suburb, where it is building a new campus. Palantir Technologies Inc. has relocated to Denver this year, from Palo Alto, California.

Tesla Inc. founder Elon Musk said this week that he’s moved to Texas to focus on big projects under way for Tesla as well as Space Exploration Technologies Corp., which he also runs. He previously moved his private foundation, which was based in California, to Austin. Moving carries enormous tax implications for high net worth individuals. Texas has no personal income tax, while California imposes the highest personal income levies in the nation on its richest residents.