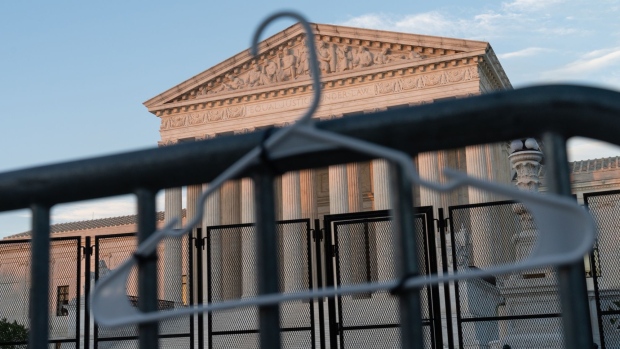 A hanger tied to security fencing outside the US Supreme Court in Washington, D.C., US, on Monday, June 27, 2022. A CBS News poll suggested that a majority of Americans disapprove of the Supreme Court's decision overturning the constitutional right to an abortion, which is inflaming a partisan divide on display in comments by senior lawmakers. , Bloomberg

(Bloomberg) -- Oracle Corp., one of the largest US tech employers, has strengthened worker benefits for abortion access while remaining publicly silent on the issue.

The company has updated its health benefits policy to include a lifetime maximum reimbursement of $10,000 for travel and lodging for “legal abortions,” according to documents reviewed by Bloomberg. The change to the 2022 health benefits plan is effective Friday.

After the Supreme Court’s June 24 decision overturning Roe v. Wade, some tech companies, including Amazon.com Inc. and Apple Inc., announced benefits such as paying for employees’ travel expenses for abortions. The benefits are aimed at helping workers located in states where abortions are banned or are likely to be restricted. Oracle, which in December 2020 moved its headquarters to Austin, Texas, from Redwood City, California, hasn’t said anything publicly about the ruling.

Oracle also hasn’t made any companywide employee communications related to abortion access in the week since the court’s decision, according to workers who asked not to be named because the information is private. The company circulated an internal email this week about changes in health benefits, including extended parental leave. But the memo didn’t mention the new coverage for abortion travel, according to a manager who described its contents to Bloomberg.

Oracle, the second-largest software company by revenue, employed 143,000 people as of the end of May, about one-third of whom are in the US at locations including Seattle, Denver, Orlando, Florida, and the former headquarters in the San Francisco Bay area, according to company filings and its website.

While software peers like Salesforce Inc. are reliable supporters of liberal causes, Oracle has long aligned itself with conservative politics. Billionaire co-founder and Chairman Larry Ellison has donated to Republicans including former President Donald Trump. Chief Executive Officer Safra Catz advised Trump during his transition after the 2016 presidential election and was viewed as a potential Cabinet appointee.

The abortion issue is particularly relevant in Texas, where Attorney General Ken Paxton has said state law banned abortions in light of the court’s decision. Paxton also said his office is considering penalizing companies that aid their employees in getting abortions.

Hewlett Packard Enterprise Co., another software maker that moved its headquarters to Texas from Silicon Valley in 2020, announced earlier that it would cover costs associated with out-of-state abortion travel for any Texas-based employees.