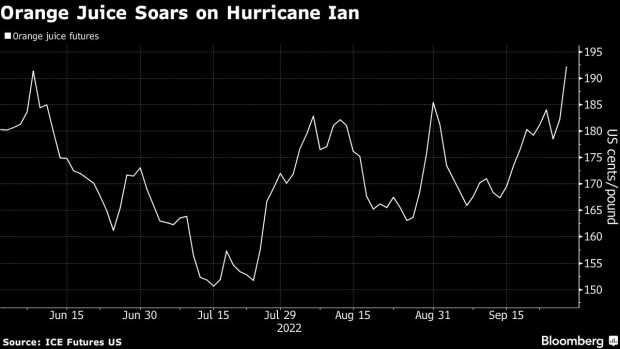 Oranges in a basket during a harvest in Avon Park, Florida, U.S., on Wednesday, March 2, 2022. Florida will produce the smallest crop of oranges in more than 75 years, reported the AP. , Bloomberg

(Bloomberg) -- Hurricane Ian is poised to ravage Florida’s orange crop as it tears across the state, flooding the state’s groves and ripping fruit off branches. Not only will it drive up the cost of juice for consumers, but may drive farmers struggling against disease and real estate development out of business.

About 90% of the crop belt in the top US producer of orange juice are in Ian’s path, including the three top-producing counties in the state, according to Donald Keeney, Maxar Technologies Inc. meteorologist. Futures prices soared for a second day as the storm’s track shifted east to cover more of the region, on mounting concern that the harvest will take a huge hit once all the damage is revealed in coming days.

“There’s not a thing in the world you can do to protect crops,” said Raymond Royce, executive director at Highlands County Citrus Growers Association in Sebring, Florida. “All the areas are going to have impact. It could be the the final straw for some Florida growers.”

The hurricane represents a fresh blow to growers in Florida already contending with a devastating disease called citrus greening that damages fruit and eventually kills trees. Further devastation of the Florida crops could further increase the need for the US to import fruit at a time when supply is very tight all over. The US, which accounts for roughly 11.5% of global production, needs to bring in 65% of what it uses. Stockpiles in top producer Brazil are at the lowest since 2017.

“The citrus industry in Florida is already teetering on the brink because of citrus greening,” Florida Republican Senator Marco Rubio said on CNN. “They lose this year’s crop and a bunch of trees, you can’t just restart that.”

Farmers are trying to secure equipment and pump sheds so they aren’t blowing around, Royce said, but flooding is inevitable. “The problem is the whole area is going to be inundated with a lot of water and you may just not be able to pump water out because there may be not anywhere to put it.”

Growers are hunkering down and hoping the wind doesn’t cause too much damage. “We’ve cut limbs and stuff down that we thought might be a problem and we’ve moved things around,” said James Oleson, owner of Boyett’s Grove & Citrus Attraction in Brooksville, Florida.

After the 2005 hurricane season, many citrus producers in Florida could not fully restore operations, said Rabobank analyst Andres Padilla. It may be even harder to recover this time as growers recently affected by citrus greening don’t have enough economic resources to try to rehabilitate groves. “Intense damage to the crops could permanently remove some of the producers from the market,” he said.

Ian could also accelerate an existing shift in demand. High inflation has already pulled some consumers away from orange juice. Aging population and fewer children per family is also making some families lose the habit of sharing a cup of juice during breakfast, Padilla said.

Florida’s share of orange production has dwindled due to citrus greening, and is set to fall behind California as the largest producer in 2021-2022 even as that state’s output has suffered from drought. Still, Florida accounts for more than 90% of juice in the US.

“The only problem is that as much as the crop could be blown off the trees, the high prices and tighter supply will also shrink demand,” said Judy Ganes of J Ganes Consulting. After hurricane Irma five years ago, Florida turned to Brazil for increased imports, she said. “The loss in consumption proved worse than the fruit drop.”