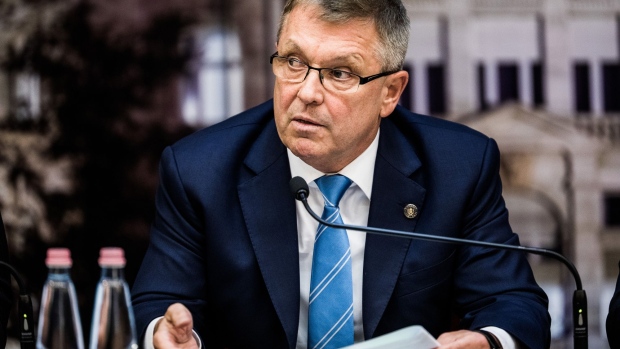 Gyorgy Matolcsy, governor of Hungary's central bank, speaks during an interest rates decision briefing at the Magyar Nemzeti Bank in Budapest, Hungary, on Tuesday, March 26, 2019. Hungary's central bank took its first step to unwind monetary stimulus since 2011, the start of tightening by one of Europe's most enduring proponents of loose policy. , Bloomberg

The central bank can open up its credit programs again only if fiscal policies return to a sustainable path and inflation is thus defeated, Matolcsy wrote in his weekly newspaper column on Monday. He warned of a budget funding gap that could reach 1 trillion forints ($3.1 billion).

“Rising interest payments and central bank losses -- which could reach several hundred billions of forints -- will force the government to look for new revenue sources,” he wrote in the Magyar Nemzet newspaper.

The government has planned to narrow the budget shortfall from its original plan to 4.9% of gross domestic product this year by postponing some investments. Still, the pre-election spending, including increases in pensions and family tax rebates, will will stretch the budget deficit.