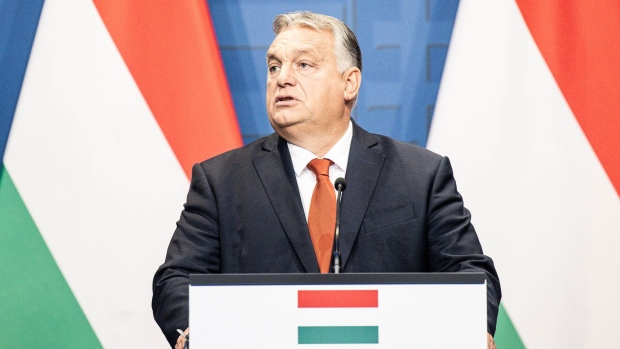 Viktor Orban, Hungary's prime minister, speaks during a news conference in Budapest, Hungary, on Monday, Oct. 3, 2022. Hungary's parliament is likely to approve Monday the first of more than a dozen anti-corruption measures that the government has vowed to implement to unlock billions of euros in European Union funds. Photographer: Akos Stiller/Bloomberg , Bloomberg

Hungary is prepared to loosen political control over universities overseen by so-called public trusts set by Orban in 2021, which critics say are aimed at exerting political control over the education system. Orban’s political allies, including most of his ministers, have filled top positions in the trusts, which involve controlling spending and potential lifelong terms.

“In principle, we’re open to” crafting conflict-of-interest legislation that would force ministers to give up their posts in the trusts, Cabinet Minister Gergely Gulyas told reporters in Budapest on Thursday. At the same time, he called the EU pressure “unacceptable and intolerable.”

The EU is boosting pressure on Hungary for suspected violations of basic democratic norms under Orban since 2010, including widespread corruption and attacks on academic freedom.  Last month, the European Commission, the EU’s executive arm, effectively froze almost 28 billion euros ($30 billion) in funding for Hungary.

The European Commission said on Monday it would no longer offer EU-wide scholarships to Hungarian students enrolled in institutions overseen by the contested public trusts, which by now include most state universities.

The ban will be in place until Hungary delivers “full and adequate” measures to resolve concerns, EU spokesman Balazs Ujvari said on Monday. More than 8,700 Hungarian university students took part in the Erasmus program in 2021.

Opposition parties have decried the trusts as a misappropriation of public funds, while others say the network creates a system that entrenches Orban’s influence regardless of election outcomes.

“Students’ access to education and student services should be above politics,” Budai said.