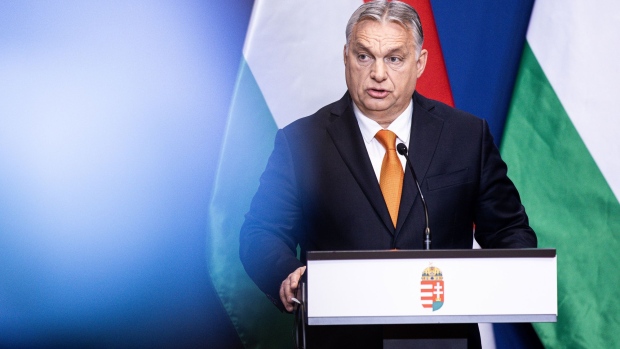 Viktor Orban, Hungary's prime minister, speaks during a news conference in Budapest, Hungary, on Tuesday, Dec. 21, 2021. Orban's government has objected to last year’s decision by the top EU court that his government can’t hold asylum seekers indefinitely in a transit area on the border with Serbia. , Bloomberg

(Bloomberg) -- Hungary’s Prime Minister Viktor Orban said he’ll use a visit to Moscow to seek an increase in the volume of natural gas his country buys from Russia.

Orban, who spoke Friday in a weekly interview on state radio channel Kossuth, will meet with Russian President Vladimir Putin on Feb. 1.

In response to criticism that his visit comes amid tensions between Ukraine and Russia, Orban said he would discuss security with both European Union and NATO officials before he traveled.