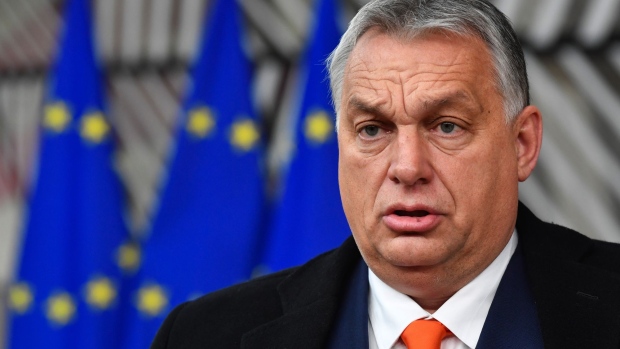 Viktor Orban, Hungary's prime minister, speaks to journalists as he arrives at a European Union (EU) leaders summit in Brussels, Belgium, on Thursday, Dec. 10, 2020. EU leaders will likely approve today a landmark stimulus package, after Germany brokered a compromise with Hungary and Poland to lift their veto over the deal. Photographer: Geert Vanden Wijngaert/Bloomberg , Bloomberg

(Bloomberg) -- Hungarian Prime Minister Viktor Orban confirmed a spending plan that includes a steep increase in the minimum wage and a tax refund for parents ahead of next year’s elections.

Orban announced the steps to lawmakers on Monday after opinion polls showed that his ruling Fidesz party and a united opposition are running neck and neck ahead of the vote, which is poised to be the most closely fought contest since Orban came to power in 2010.

Orban had previously conditioned the measures on economic growth exceeding an annual 5.5% this year, a level he now said Hungary was on track to exceed.

The steps include a planned 20% increase in the minimum wage, which he said there was now a “good chance” to implement, as well as a cumulative 600 billion forint ($2 billion) in a personal income-tax refund for parents by February, just two months before elections.

The government is also sticking to what critics call an anti-LGBTQ law that’s aimed at firing up his conservative voters but which Orban maintains was crafted to “protect children” from homosexual content. The cabinet will stick with the law, the premier said, adding that EU demands to change it were “absurd.”