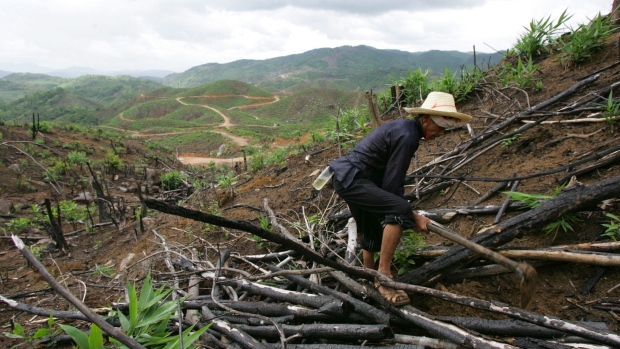 A worker clears land for the replanting of a forest at Changxian County, on China's southern Hainan Island Saturday July 2, 2005. , The Canadian Press

Timber company Sino-Forest and several of its top executives defrauded investors, misled investigators and "engaged in deceitful or dishonest conduct," the Ontario Securities Commission ruled in one of Canada's largest corporate fraud cases.

Allegations of fraud against Simon Yeung were dismissed, but the regulator concluded he misled staff during their investigation.

The investigation into Sino-Forest was triggered in 2011 when short seller Carson Block of Muddy Waters Research published a scathing report accusing the company of exaggerating its assets and fabricating sales transactions in what amounted to "a multibillion-dollar Ponzi scheme."

"We applaud the OSC for persisting through an undoubtedly complex investigation and hearing to see that justice is served," Block wrote in an email Friday.

"It's important to remember that our report was initially quite controversial and met with a good deal of hostility — at a time when the freedom of speech is under threat, this outcome is a reminder of the value of critical voices and freedom of expression."

The former executives now face the possibility of being permanently banned from Canada's capital markets, or fined up to $1 million for each failure to comply with Ontario securities law.

A separate hearing on sanctions and costs has not been set.

Chan's lawyer, Emily Cole, said her client was disappointed and would be going over the decision. Stephen Wortley, a lawyer for Ip, Hung, Ho and Yeung, said he was also reviewing the decision and declined further comment.

Sino-Forest, which was established in 1994, was once the most valuable forestry company listed on the Toronto Stock Exchange. Although it was based in Ontario, the company conducted most of its business in China until it collapsed in 2012.

The decision by the OSC follows the settlement of several lawsuits by investors in connection with the case.

In 2015, several Canadian banks and other financial institutions that helped the company raise millions on the financial markets agreed to a $32.5-million settlement in a class-action lawsuit filed by investors who lost money.

David Horsley, former chief financial officer of Sino-Forest, also agreed to pay $6.3 million to the OSC and to settle class-action lawsuits in 2014, while Sino-Forest's former auditor, Ernst & Young, agreed to a $117-million class-action settlement with investors in 2013.

The case against Sino-Forest and its former executives was one of the most complicated cases in the Ontario Securities Commission's history.

"Today's decision on the merits is an important milestone in a complex, multi-jurisdictional case that spanned close to 200 hearing days and involved over 2,000 exhibits," the commission said in a statement.

The hearing heard testimony from several witnesses from China over video conferencing and with the assistance of translators. There were more than 170 hearing days, 22 witnesses and over 22,000 pages of transcripts.

Defence lawyers for the executives had argued that what the OSC called fraud were simply mistakes made by a fast-growing company. They also said that behaviours that may seem strange in a Canadian context were typical business customs in China.

But the commission said Sino-Forest was listed on the TSX, was an Ontario reporting issuer, raised US$3 billion from investors, and was required to issue financial statements prepared in accordance with Canadian standards.

"Ontario securities law is paramount and overrides any explanations for illegal conduct being excusable in the name of guanxi, however it is defined," the commission said in its decision, using a Chinese term that refers to a network of influential relationships that help facilitate business dealings.