TORONTO -- Canada's banking regulator has published the final changes to its guidelines for residential mortgages aimed at taking some of the risk out of the market, including a new stress test for buyers who don't need mortgage insurance.

The Office of the Superintendent of Financial Institutions said Tuesday the revised guidelines will come into force Jan. 1.

Under the changes, even homebuyers who don't require mortgage insurance because they have a down payment of 20 per cent or more will have to prove they can continue to make payments if interest rates rise.

"We certainly see the risks that are caused by high household indebtedness, by the high house, property values in some markets... and the risks posed by potential changes in interest rates," superintendent Jeremy Rudin told reporters.

Other changes include restrictions on co-lending, or bundled mortgages -- in which federally regulated lenders pair up with unregulated providers to finance a property -- aimed at ensuring financial institutions do not circumvent rules that limit how much they can lend. Federally regulated financial institutions must also establish and adhere to loan-to-value ratio limits that are updated as housing markets and economic dynamics evolve.

The broad thrust of the final guidelines are similar to what OSFI had proposed in July, when the regulator put out a draft for public consultation. The proposed changes were criticized for potentially increasing costs and limiting access to mortgages for some buyers.

The Fraser Institute, an independent, non-partisan think tank which tends to prefer free-market policies, said last week that a stress test for uninsured mortgages was unnecessary and could do more harm than good.

Rudin reiterated Tuesday that OSFI was aware the stricter guidelines could have unintended consequences, such as sending borrowers towards more risky lenders that are out of the regulator's purview.

Rudin also said he would consider revisiting its uninsured mortgage stress test down the line and adapting it as circumstances change.

"We are prepared to revisit that if there is an evolution in interest rates over time," he told reporters. "But right now I would expect it to be durable, because it is well lined up with the comparable test ... for insured mortgages."

READ MORE: WHAT THE NEW STRESS TEST RULES MEAN FOR YOU

OSFI made one major change from its July draft to adjust the calculation of the minimum qualification rate used as part of the stress test.

The initial proposal stipulated that the qualifying rate for uninsured mortgages would be the contract rate plus two percentage points. In the published guidelines, OSFI said would-be homebuyers will need to prove they can still service their uninsured mortgage at a qualifying rate of the greater of the contractual mortgage rate plus two percentage points or the five-year benchmark rate published by the Bank of Canada.

Rudin said the tweak was to address concerns and feedback that using the contract rate plus two percentage points would incentivize borrowers to find the lowest possible rate, which could be shortest possible term.

"We didn't want to create an artificial incentive for borrowers to shorten terms because of the regulation," he said. 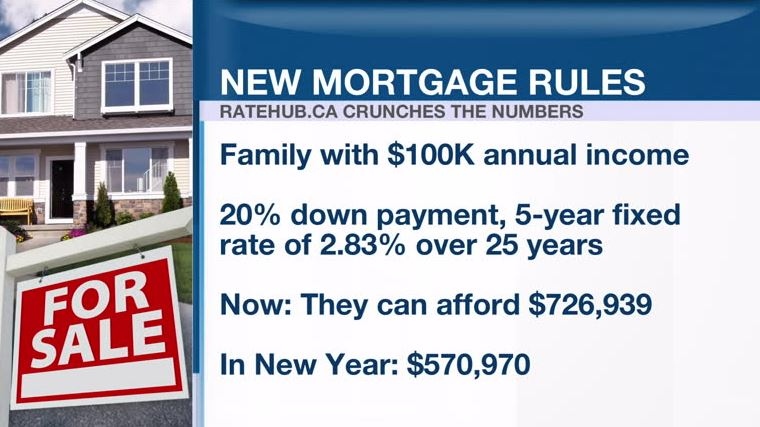