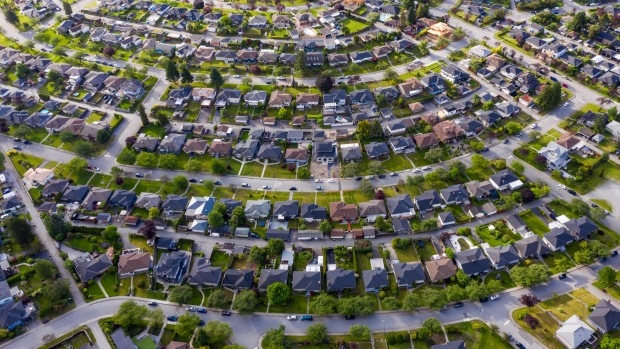 Canada’s banking regulator has halted talks on changing its mortgage stress test as it eases capital requirements to free up $300 billion (US$215 billion) of lending capacity to help ensure financial stability during the coronavirus pandemic.

The Office of the Superintendent of Financial Institutions lowered the domestic stability buffer requirement for Canada’s key banks to 1 per cent of risk-weighted assets from the 2.25 per cent level set for the end of April. The buffer -- one of four capital requirements for the biggest banks -- will not increase for at least 18 months, according to the regulator.

The action will reinforce the commercial banks’ ability to supply credit to the economy during any disruption related to Covid-19 and associated market conditions, OSFI Superintendent Jeremy Rudin said at a press conference Friday in Ottawa.

“We are encouraging the institutions to use this capital as well as their liquidity buffers, as required.” Rudin said.

Officials are ramping up support as Canada’s economy reels from both the coronavirus and plunging oil prices, with many economists now predicting the country is on the brink of recession. The move to shore up bank lending came as the Bank of Canada cut interest rates by another 50 basis points to 0.75 per cent and Finance Minister Bill Morneau announced a new facility to support funding markets for small- and medium-size businesses.

“While the Canadian policy makers are trying to get ahead of the expected economic slowdown impact of the coronavirus, for the Canadian financials, the immediate impact of the cure may be worse than the disease,” Barclays Plc analyst John Aiken said in a note to clients. “The actions taken may have the impact of moderating the depth of a recession, but the implications of the rate cut means that earnings headwinds for almost all the financials have just begun.”

Index rose 16 per cent at the end of trading in Toronto, outpacing the 9.6 per cent rise of the country’s benchmark index as global efforts to fight a virus-induced slowdown swung into action.

Canada’s big banks already surpass the regulatory requirements for guarding against against risks to the financial system. In addition to the domestic stability buffer, other capital requirements include a minimum Common Equity Tier 1 capital level, a capital conservation buffer and a surcharge for the six biggest banks deemed domestically significant. OSFI typically reviews the domestic stability buffer twice a year, in June and December.

OSFI is also halting discussions on easing of the mortgage stress test rules -- part of the regulator’s move to suspend consultations on all new or revised guidance on rules due to the current developments and “strain on operations of financial firms,” according to Rudin.

Canadian banks will continue to use the benchmark rate as currently published by the Bank of Canada, in gauging a borrower’s ability to take on a mortgage.

Canada’s lenders “stand ready” to help customers affected by Covid-19, according to a statement by the Canadian Bankers Association, which represents more than 60 domestic and foreign banks in the country.

Canadian banks are working closely with government and regulators to be ready to help Canadians weather economic disruptions, the association said.