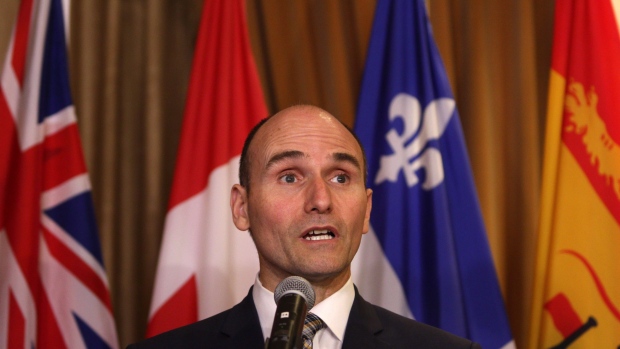 OTTAWA - The minister responsible for drawing up a national housing strategy says he and other senior cabinet members are having extensive discussions about how Ottawa should act to bring Canada’s housing market under control.

Jean-Yves Duclos said he is “in direct and intense contact over those issues” with Finance Minister Bill Morneau and Revenue Minister Diane Lebouthillier as the government prepares for Monday’s return of Parliament.

The meetings come after a year-long investigation by The Globe and Mail into questionable practices that may have contributed to a growing affordability crisis in the overheated real estate markets of Vancouver and Toronto. The Canada Revenue Agency this week launched a review into the actions of B.C. real estate speculators in light of a Globe report that uncovered possible tax evasion and fraud.

Mr. Duclos did not outline all of the options that are under consideration, other than ideas for ways to build new affordable housing.

A senior government official speaking on background added that not a day goes by that housing issues are not discussed in the Finance Minister’s office.

Mr. Duclos, the Minister of Families, Children and Social Development, was responding to questions about whether Ottawa is considering further measures related to the stability of the national housing market in light of news on Thursday that Canadian household debt has reached record heights. Home prices in the Vancouver region and Toronto have soared in recent years, raising questions about whether speculators and foreign buyers are contributing to a growing affordability crisis.

“It’s clear that, in some markets, we are concerned about the sustainability of the housing price levels and the housing-price increases we’ve seen over the recent months and years.” They are mostly Vancouver and Toronto, but we are also concerned about other areas across Canada,” he said, giving Calgary and Edmonton as examples.

“It introduces risks that can arise either from increases in interest rates, downturns in the economy, shocks in the financial market, so these are risks over which we are concerned and want to work with provinces and municipalities to make sure that we understand the size and the nature of those risks and take the appropriate policies to mitigate them.”

Prime Minister Justin Trudeau has indicated his government is reviewing possible interventions and has been studying policies of other countries – including Australia – where restrictions have been imposed on non-resident investors looking to buy real estate. During the summer, British Columbia imposed a tax on foreign home buyers, and Vancouver announced a vacancy tax this week that will apply to owners of homes that are left empty.

One announcement expected soon will involve the details of a pledge to provide federal financing to build new affordable rental housing.

Vancouver Mayor Gregor Robertson has proposed to offer $250-million worth of city-owned property for affordable housing if Ottawa helps pay for the construction.

That type of proposal is receiving a positive response from Ottawa. Mr. Duclos said Metro Vancouver leaders are “very willing and able” to provide property and partial financing for affordable housing.

“Municipal land has great potential,” said Mr. Duclos, who met on Thursday with the Federation of Canadian Municipalities board of directors to discuss the national housing strategy. Developing the plan is the responsibility of Mr. Duclos, a former economist at at l’Université Laval.

During an interview with a local CTV affiliate in Vancouver in June, Mr. Trudeau summarized the debate inside the government as it considers options. He listed the Australian example, but appeared to rule out copying it exactly.

“Australia faced similar changes, and I don’t think applying a different model to us straight on is going to work, but that’s exactly the kinds of conversations we’re having,” he said. “The federal government does have some pretty big tools and levers to pull, except anything we do for Vancouver – and maybe for Toronto, which is facing it a little bit – would possibly have unintended consequences in housing markets across the country that aren’t facing the same pressures. … And that’s why, yes, it’s an urgent situation to deal with, but it’s all the more important that we deal with it right the first time.”

Former Conservative finance minister Joe Oliver said he examined the Australian restrictions on foreign buyers of residential properties and discussed the measure with his Australian counterpart, but concluded it would be too extreme for Canada and could send a negative signal internationally.

Mr. Oliver, who now writes on economic issues, said he is concerned that the Liberal government has raised unrealistic expectations by promising to improve the affordability of housing. He suggested it might be better if Ottawa delays any further action until it receives more data on the effectiveness of B.C.’s new tax on foreign buyers of residential properties in Metro Vancouver, which took effect last month.

“It is a serious issue. On the other hand, the question is, what can you do about it without causing real harm?” he said. “The last thing you want to do, of course, is have a major market correction which could have a fairly broad implication for the economy. You don’t increase affordability by throwing people out of work, so you have to be careful about what you do … I wouldn’t think something really draconian is called for.”