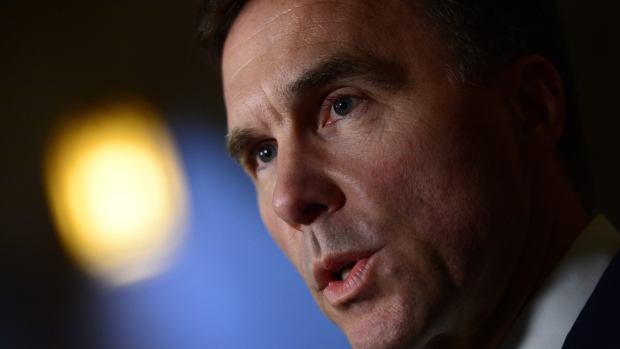 OTTAWA -- The federal government posted a razor-thin $1-billion deficit in 2015-16, a period in which both the Liberals and Conservatives had turns managing the public books.

The shortfall, released in a package of year-end numbers Friday, was a bit smaller than the $5.4-billion deficit projected by the Trudeau government in its March budget.

It would have been bigger if not for the Conservatives' sale of GM shares, and a surge in personal tax revenue linked to the Liberals' tax hike on the rich.

But the final deficit figure is sure to rankle the Tories, who have long argued they left government finances on track for a surplus before they were defeated in last fall's election.

The number released Friday is poised to trigger a fresh round of political sparring over which party did a better job overseeing the federal treasury.

"It shows that they had an economic approach -- and they campaigned on it hard a year ago -- that they were going to cut their way to a surplus... So, they made cuts, they cut government services."

Lauzon also noted that Harper-led governments ran a string of shortfalls during its decade in power.

MP Lisa Raitt, the Tories' finance critic, has maintained her party left the Liberals on solid fiscal footing. She has said that position helped generate government revenues after the election because of the "low-tax environment" that was left behind.

Each party held power for several months in fiscal 2015-16, a year also marked by economic disappointment, which was mostly due to the feeble global economy and low oil prices.

On Friday, the Finance Department's 2015-16 annual financial report said that, compared with the year before, revenues were up $13.1 billion, program expenses increased $17 billion and debt-servicing costs were down $1 billion.

The numbers show the 2015-16 deficit would have been larger had it not been for a $2.1-billion gain from the Tories' one-time sale of Ottawa's remaining shares in General Motors and a $9.2-billion increase in personal income tax revenues.

The extra cash generated from personal income taxes, which was 6.7 per cent higher than 2014-15, largely reflected a boost in tax-planning efforts by high-earning individuals, the report said. A push to declare more earnings in 2015 came in response to Liberal measures to change tax brackets in 2016 in order to impose a higher rate on top earners, it added.

Corporate tax revenues, up $2 billion or 5.1 per cent compared to 2014-15, were also higher than expected, the report said.

On the other hand, the document also noted that the economy's performance was significantly weaker in 2015-16 than anticipated in the Conservatives' 2015 budget.

The report said Canada's nominal gross domestic product, viewed by Finance as the broadest indicator of the tax base, only expanded 0.5 per cent in 2015 -- its slowest pace of growth since 1981 outside of the 2008-09 recession. The 2015 budget had predicted nominal GDP to expand that year by 1.8 per cent.

In May, the Finance Department's preliminary estimates projected a $2-billion deficit for 2015-16, before year-end adjustments.

At the time, Morneau acknowledged that Liberal moves in fiscal 2015-16 contributed to the deficit. But he added: "When we take out the measures that we've put in, we're still in a deficit position.

So, it's quite clear that we were starting off with a deficit."

The Liberals' election campaign platform promised annual deficits of no more than $10 billion over the next couple of years to allow them to spend billions on infrastructure projects as a way to deliver a boost to the struggling economy.

But the Liberals later blamed even weaker conditions for a revised forecast in the March budget of five straight annual deficits totalling more than $110 billion, beginning with a shortfall of $29.4 billion in 2016-17. Deficit projections over the coming years include annual risk adjustments of about $6 billion, in case economic conditions deteriorate.
In the coming weeks, the Liberals will release their fall fiscal and economic update. With the still-sluggish economy, Morneau has hinted at least some of that $6 billion cushion might be needed.

"In the last budget, we made growth projections and we took a level of prudence," Morneau said recently.

"Right now, I can say that we made the right decision because it's the case that the growth level is a little lower than forecast."