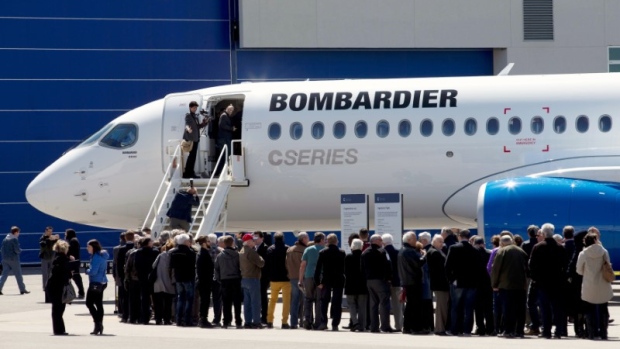 MONTREAL -- The federal government says it will provide $372.5 million in interest-free loans to Bombardier, a move that elicited criticism even though it is far less than the transportation giant originally sought more than a year ago.

The contributions will be provided over four years, in a number of installments, with the majority allocated to the Global 7000 program.

The money will be handed out in instalments over four years to support the Global 7000 and CSeries aircraft projects, the government said.

Most of the loans would go to the Global 7000 business aircraft program, which is scheduled to go into commercial service next year. The remaining third would go to the CSeries passenger jet, which was mired in delays and cost overruns prior to entering commercial service last year.Several federal cabinet ministers made the announcement Tuesday evening at a Bombardier facility in Montreal.

"It started out on a piece of paper and then became the best plane in the world in its class. This is something we should all be proud about."

$372.5M for @Bombardier is an investment in thousands of middle-class jobs & will strengthen Canada’s #aerospace industry. #cdninnovation

Innovation Minister Navdeep Bains said the money will preserve thousands of high-paying technology jobs in Ontario where the Global will be assembled and Quebec where it is completed and the CSeries is built.

"The investment I'm announcing today is the right solution for the time and in terms of innovation, jobs and long-term competitiveness for the company," he said.

Last year, Bombardier received a US$1-billion investment for the CSeries passenger jet program from the Quebec government in exchange for a 49.5-per-cent stake. The company also sold a 30 per cent stake in its railway division to pension fund manager Caisse de depot for US$1.5 billion.

Bombardier had also been appealing to Ottawa for US$1 billion in assistance since late 2015.

"When Bombardier came to ask the government, they had particular needs," Garneau said when asked why Ottawa hadn't agreed to the US$1 billion request.

"The situation has evolved -- evolved in the sense that the Quebec government has since invested and so has the Caisse de Depot. There was an increase in the orders with Air Canada and Delta. The company has restructured in an important way."

He said the money provides the company with additional flexibility to weather technological and market challenges and help as it begins looking at future aircraft programs.

The company will repay the loans through royalties on each aircraft sold. It's the same system used when Ottawa provided $350 million for the CSeries in 2005.

From a fiscal perspective, providing loans to Bombardier allows Ottawa to offer assistance without hurting the fiscal balance, as they would be recorded on the balance sheet as an asset.

"The federal government's involvement in the CSeries and Global 7000 programs is a step in the right direction," Harold Fortin, a spokesman for Quebec Premier Philippe Couillard, said in a statement.

"We expect the federal government to continue this collaboration with the objective of developing Quebec's aerospace industry."

Interim Conservative leader Rona Ambrose said in a statement that she is "very concerned" about this agreement and its implications for taxpayers.

"Jobs aren't created by handouts to a favoured company, especially when that company publicly said it didn't need the money. The way to encourage investment and job creation is not through handouts, but rather through lower taxes and getting government out of the way," said Ambrose.

"This government started out with some encouraging talk about 'value for taxpayers,' but it's now the same old approach of giving big taxpayer subsidies to powerful corporate interests," Aaron Wudrick, federal director for the Canadian Taxpayers' Federation, said in a statement issued within minutes of the announcement.

The support for the Montreal-based manufacturer could also have repercussions abroad.

WEIGH IN: What’s your reaction to Ottawa’s loan program for Bombardier? https://t.co/bxT76O6lte

Brazil has said it would launch a trade challenge against Canada before the World Trade Organization over financial support for Bombardier, which competes with Brazilian-based Embraer. Bombardier has said such a move would be without merit.

Brazil has complained about US$2.5 billion in investments in Bombardier, including money to "ensure the viability of the new CSeries aircraft and its placing on the market at artificially reduced prices."

International Trade Minister Francois-Philippe Champagne, had one message for any country considering a trade challenge: bring it on.

"I am very much prepared to fight for what we are doing tonight," he said, adding that all countries, including Brazil, help their aerospace sectors.

Bellemare added: "This is the best plane in its class, so people are finding ways to come after us. We'll find ways to compete successfully."

Bombardier has announced job cuts totalling 14,500 positions over the last two years in an effort to regain its financial footing.

As of late November, the company received at least 360 firm orders for the CSeries jets.

"Our liquidity position is very secure," Bellemare said. "We can now think to the future."