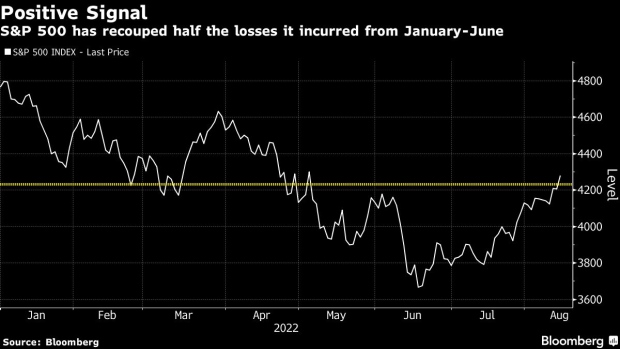 (Bloomberg) -- The S&P 500 marked a much-watched milestone Friday: it retraced half the losses from its steep drop this year in a bullish signal of market recovery.

With a 1.7% one-day gain, the index surpassed the 4,232 level and closed the week at 4,280, meaning it has recouped more than 50% of the losses it notched between its January peak and June nadir. The gauge has also logged its fourth consecutive week higher, putting question marks around the bear market that has haunted equities during a stress-filled summer for investors.

“That’s a perfect 50% retracement from the peak to trough in this cycle. And that’s important because that tends to delineate the difference between a bear market rally and the start of a bull run,” Art Hogan, chief market strategist at B. Riley, said in a phone call. “And that’s going to get a lot more believers in.”

Markets bounced higher this week as consumer pricing and manufacturing data suggested calming inflation that could discourage the Federal Reserve from taking more hawkish action in the coming months. This recovery, short-lived or not, might also signal the threat of a recession is easing.

Yet the sharpness and magnitude of the rebound will test the resolve of those who have been more cautious, said Keith Lerner, co-chief investment officer at Truist Advisory Services.

“The risk-reward is less attractive,” he commented in an interview. “But right now, you’re getting steamrolled by momentum, and this rally has caught a lot of different market players off sides, and as it goes up, it’s a pain trade higher.”

Meanwhile, bears remain skeptical about the duration of the rally. Prior 50% retracements in 1974, 2001 and 2009 saw downturns shortly after reaching the threshold, according to Jonathan Krinsky, chief market technician at BTIG, who said that a resurgence in commodity prices and weakening bonds looms over positive measures.

“The market could still roll over at any time. In other words, we still need a bit more upside follow-through to confirm that the market has indeed retraced more than 50% of its decline,” said Matt Maley, chief market strategist at Miller Tabak & Co. “A slight break of the 50% level is not enough -- because it was not enough in 2001 or 2008.”