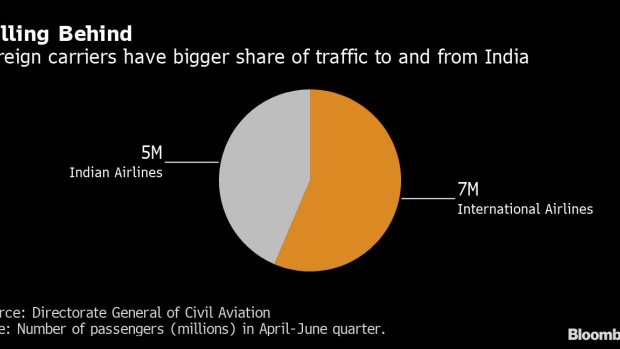 An Air India Ltd. aircraft taxis past other aircraft operated by the airline at the Indira Gandhi International Airport in New Delhi, India, on Tuesday, Sept. 28 2021. The India government is attempting to sell state-run Air India after two failed attempts. Despite the mounting debt and losses, the airline has some lucrative assets, including valued slots at London's Heathrow airport, a fleet of more than 100 planes and thousands of trained pilots and crew. , Bloomberg

(Bloomberg) -- Almost a year has passed since India’s biggest conglomerate bought Air India Ltd., promising to turn it into a world-class airline. Reviving the carrier and winning over passengers won’t be easy.

A run of 15 years without profit has taken its toll. While Air India remains a high-profile operator in one of the world’s biggest aviation markets, customer complaints about a decline in standards have hurt its reputation. Reports of incidents such as ants and rats on planes, cockroaches in food and even a bat (animal, not cricket) flying around a cabin mid-journey haven’t helped.

Tata Group, which paid 180 billion rupees ($2.2 billion) to buy Air India back from the government, has a five-year transformation plan called Vihaan -- Sanskrit for new dawn. UK-based FutureBrand was last week brought in to help with the makeover, which could include dropping the airline’s “outdated” Maharajah mascot, local media reported.

There’s a “desperate need to improve its product and service,” said Shashank Nigam, chief executive officer of airline brand-strategy firm SimpliFlying.“To win both the hearts and wallets of customers, Air India needs to get this right. If you’re looking for a step change, that will probably come around 2024.”

Campbell Wilson, who shifted from Singapore Airlines Ltd.’s low-cost unit to become Air India CEO over the summer, told reporters recently that aircraft interiors will be refurbished, including seats, cushions and carpets.

Nigam said Air India needs to position itself as a progressive brand that caters to younger people, which is particularly important given India’s demographics and sheer size of its young population. By previously branding itself as the custodian of Indian culture and heritage, the airline gave off an impression of being old fashioned and stuck in time, he said, adding that its fleet is old and “needs urgent rejuvenation.”

As part of the reinvention, new style rules have been issued for cabin crew, including a requirement for male attendants to shave their heads if they have deep receding hairlines or bald patches. Blonde hair “is strictly not permitted” for female crew. Meanwhile, a huge order for aircraft is also in the works and the carrier has leased dozens of planes.

In his biography Beyond The Last Blue Mountain, Air India’s founder J.R.D. Tata said he wanted the carrier’s service, food and brand image to be unrivaled, leaving passengers with no reason to complain. He made recommendations on matters such as the color of tea and the optimal recline of seats.

Air India is up against younger operators, with the likes of Akasa entering the market and Jet Airways Ltd. aiming to return. IndiGo, controlled by InterGlobe Aviation Ltd., dominates with its low-cost services, taking more than half of the domestic market. Air India aims to have a 30% share of India’s local and international passenger traffic in five years, versus about 9% now.

Tata said last week that its Vistara joint venture with Singapore Airlines would be merged into Air India, creating the country’s second-biggest carrier. Another two airlines under Tata -- AirAsia India and Air India Express -- will be merged into a single low-cost unit, streamlining operations.

“Partnerships like this combine sales effectiveness, customer bases, loyalty programs of multiple airlines, so that you can really make one plus one be worth more than two,” said Allan Schulte, Bain & Co.’s head of Asia-Pacific airlines, logistics and transportation. “The benefit of India is you have got a large domestic travel base to begin with and there are a lot of natural cost advantages.”

Air India also competes with the likes of Emirates and Etihad Airways PJSC, which dominate overseas travel to and from India and are known for high standards of service and aircraft. An advantage for the Indian carrier is its ability to operate non-stop flights to the US and Europe, where it has lucrative landing slots, without having to transit in the Middle East.

Covid hit India’s aviation market hard, like it did the rest of the world, but the situation is improving. In the first 10 months of 2022, India’s air traffic was up 59% from a year earlier to nearly 100 million passengers. In the same period in 2019, prior to the pandemic, the figure was 118 million.

Decades of government ownership hurt standards at Air India, but the experience and investment power of Tata and Singapore Airlines should help it fix issues such as an aging fleet, poor maintenance and mismanagement, said Anurag Singh, managing director at consultancy Primus Partners in New Delhi.

The Vihaan program initially aims to identify and resolve grievances tarnishing the airline’s brand, including ensuring that customers are refunded for flights that were canceled during Covid. Complaints about issues such as broken seats and faulty entertainment systems are still fairly commonplace.

Despite the naysayers, Air India has the best on-time performance among Indian carriers, at 90.8%, according to the nation’s aviation regulator. The airline is leasing more aircraft and stepping up staff training, with plans to bring in hundreds of cabin crew and dozens of pilots as air travel recovers.

“It is not an overnight initiative,” Wilson said in October. “There is a lot that needs to be done.”