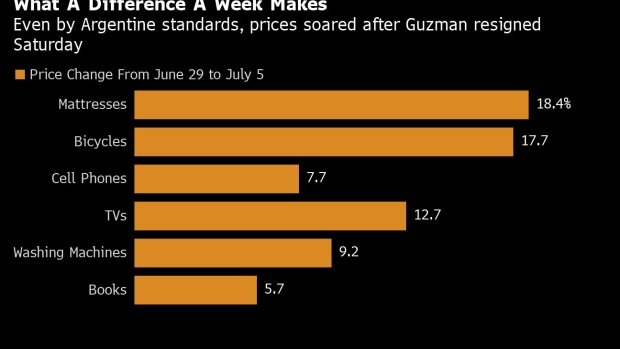 A shopper leaves a consumer electronics store in Buenos Aires on July 6. , Bloomberg

(Bloomberg) -- On Sunday morning, Argentines woke up early and rushed to the grocery store, the bakery, the liquor store, the mall, wherever they could go to stock up fast.

The night before a political bombshell had dropped: the economy minister, Martin Guzman, had suddenly resigned. And Argentines, long accustomed to financial chaos, knew the current crisis was about to get a lot worse. So before the peso could plunge when markets reopened, and before retailers could jack up prices, they wanted to buy the essentials as soon as possible.

It became a race against inflation in a country that already had one of the highest rates anywhere -- an annual 60% as of May. Argentina’s parallel exchange rate, untethered from the government’s strict currency controls, has fallen 17% so far this week, prompting Buenos Aires shop owners to post signs announcing a 20% mark-up on all listed prices.

Prices on mattresses and bicycles jumped 18% in just one week, while TVs now cost 13% more and price tags on cell phones swelled 8%, according to high-frequency data analyzed by Buenos Aires-based consulting firm Ecolatina.

“Nobody has a strategy, we’re just living in the moment,” Maximiliano Martinez, manager of a small appliance store on a commercial strip in Buenos Aires, said Thursday afternoon. Like others, Martinez raised prices on all items in his store -- coffee machines, toasters, blenders, headphones -- by 20%. He says his suppliers immediately jacked up their prices by 35%. He’s looking to buy digital price tags, he said, because it’s becoming difficult to keep up with constantly rising prices. “I can’t get around to changing all the price tags.”

Even in a global economy suddenly roiled by inflation, this is extreme. And it raises the specter that the perennial inflation spiral here is entering a breakneck new phase that will heap more pressure on embattled President Alberto Fernandez and more pain on a population that’s been losing purchasing power for years.

Guzman, while no favorite of Wall Street, was seen as the guarantor of the government’s tenuous, and crucial, financing pact with the International Monetary Fund. The country’s hard currency reserves are dwindling; its foreign bonds, which were just restructured in 2020 after a third default this century, are trading at a mere 20 cents on the dollar; and the gap between the parallel exchange rate -- 295 pesos per dollar -- and the official exchange rate -- 127 per dollar -- has blown out to levels not seen since the last devaluation panic in 2020.

To make matters worse, Fernandez is locked in a turf war with his powerful vice president, Cristina Fernandez de Kirchner. Guzman got caught in the middle. His replacement, a little-known economist named Silvina Batakis, is seen as more aligned with Kirchner, a former president herself and the leader of the more radical and populist wing of the ruling coalition.

You don’t want to be on Kirchner’s bad side, especially on prices. Just ask Federico Braun. The president of Argentina’s La Anonima supermarket chain joked at a business conference in June that he’s “marking up prices everyday” due to high inflation. That day, Kirchner and lawmakers loyal to her lashed out against him, sparking a public relations nightmare.

It’s not just big names. Even small businesses fear customer backlash for hiking prices. One Buenos Aires bakery manager was raising prices once every two months last year. Now he’s looking to raise almost weekly. The manager, who asked not to be named for fear of losing customers, says so far this year his inputs have soared with butter prices up 80%, milk almost 100% and wheat 120%.

The manager reported that customers rushed Sunday and Monday to buy bags of imported coffee beans, stocking up before prices spiked or shortages emerged. Business owners themselves are stocking up, too. Victor Natasi, owner of the Autre Monde wine shop in Buenos Aires, is doubling down on his strategy with his suppliers.

“The first thing is to buy high-end wines that gain value over time and have good shelf life before the price goes up,” says Natasi. If you don’t stock up fast, “there could be a sudden mark up of 20% to 30% from one day to the next.”