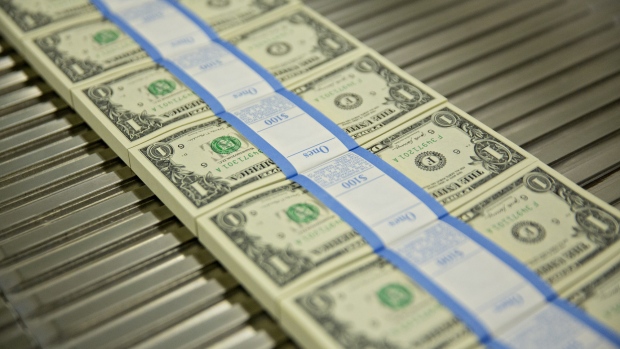 Stacks of $1 dollar notes bearing the name of U.S. Treasury Secretary Steven Mnuchin move through a machine at the U.S. Bureau of Engraving and Printing in Washington, D.C., U.S., on Wednesday, Nov. 15, 2017. A change in the Senate tax-overhaul plan that would expand a temporary income-tax break for partnerships, limited liability companies and other so-called "pass-through" businesses won the endorsement of a national small-business group today. , Bloomberg

The rate on overnight general collateral repurchase agreements, or repos, first traded at 2.25% early Thursday before dropping to 1.98%, according to ICAP. On Tuesday, it jumped to 10%, about four times greater than last week’s levels, as cash reserves in the banking system remained out of balance with the volume of securities on dealer balance sheets.

The New York Fed will offer up to $75 billion in a so-called overnight repurchase agreement operation, adding temporary liquidity to restore order in the banking system. It made the same offer Tuesday and Wednesday, deploying a tool it hadn’t used in a decade. This latest action follows the Fed’s reduction in the interest rate on excess reserves, or IOER, another attempt to quell money-market stresses.

“The fact that the Fed once again pre-announced a $75 billion overnight RP for this morning should help market conditions continue to normalize today,” Wrightson ICAP economist Lou Crandall says in a note. “Though we are no more sure than anyone else what the new ‘normal’ will look like on the far side of this week’s turmoil.”

The effective fed funds rate was set at 2.30% as of Tuesday, above the top of the Federal Reserve’s target range of 2% to 2.25%. The New York Fed will release Wednesday’s rate at 9 a.m. The overnight rates should reflect the central bank’s latest interest rate decision on Friday.

To contact the editors responsible for this story: Benjamin Purvis at bpurvis@bloomberg.net, Debarati Roy