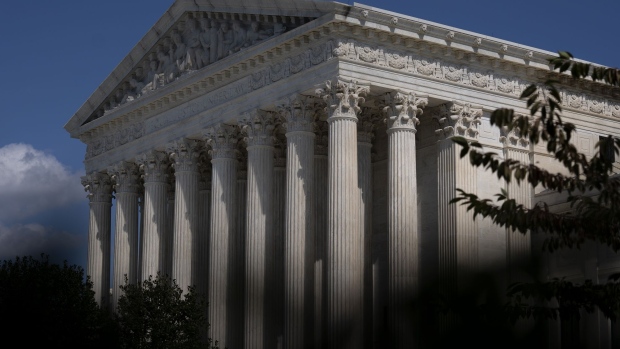 The U.S. Supreme Court stands in Washington, D.C., U.S. on Tuesday, Oct. 6, 2020. Alphabet Inc.'s Google and Oracle Corp. will face off in the U.S. Supreme Court on Wednesday in a multibillion-dollar copyright dispute with sweeping implications for technology and media companies worldwide. Photographer: Stefani Reynolds/Bloomberg , Bloomberg

(Bloomberg) -- US Supreme Court justices questioned the legality of stiff penalties the federal government says it can impose on people who fail to file required reports listing their foreign bank accounts.

Hearing arguments in a case with special resonance for Americans living abroad, the justices tested the Biden administration’s interpretation of a law the government says deters money laundering and tax evasion.

The 75-minute session, briefly interrupted at the beginning by three abortion-rights protesters, didn’t give a clear indication as to the outcome.

But some justices voiced concerns about unwitting taxpayers being hit with hefty penalties. Justice Samuel Alito pointed to contentions that “many, many people” with foreign bank accounts are unaware of the law and Treasury Department regulations.

“And if they’re aware of it, they’re pretty hard to parse,” Alito said.

The court is hearing an appeal from Alexandru Bittner, a businessman assessed a $2.72 million penalty under the Bank Secrecy Act for not filing timely reports for five years when he was living in Romania. Bittner contends the maximum fine is $50,000.

The law, which applies to US citizens and residents, authorizes penalties of as much as $10,000 for unintentional violations.

Bittner, who is a dual US-Romanian citizen, was required to file a form known an FBAR during the 2007-2011 period at issue in the case.

“You’re extracting different penalties from them for this purpose, based on this totally lawful behavior,” she told a Justice Department lawyer. “It seems to me to make more sense that Congress was talking about wanting to just know who was doing this kind of thing, for the purpose of this statute.”

Justice Department lawyer Matthew Guarnieri argued that “each time a US person maintains an account with a foreign bank, that relationship is a matter of distinct concern to the United States.”

Guarnieri also pointed to a provision that shields people from fines if a violation was due to “reasonable cause” -- a safeguard he said might apply in some instances when people weren’t aware of their obligations.

Bittner’s lawyer, Daniel Geyser, said even the threat of fines could force people to spend money on lawyers.

“That is quite the burden on the average person, especially with the cudgel of per-account penalties hanging over their head if they lose,” he said. “Anyone with 10 or 20 accounts could be facing massive fines.”

The New Orleans-based 5th US Circuit Court of Appeals sided with the government in Bittner’s case, but another federal appeals court reached the opposite conclusion. The US Chamber of Commerce is taking Bittner’s side, saying the 5th Circuit decision permits far steeper penalties than Congress intended.

Tax compliance issues for Americans living abroad have increased in the past decade, pushing many Americans to give up their passports. Congress added another set of paperwork starting in 2014 with the Foreign Account Tax Compliance Act.

The U.S. and Eritrea are the only two countries in the world that tax people based on citizenship, rather than where they live. The result of all the compliance hurdles has meant that many Americans living abroad have trouble accessing bank accounts, mortgages and other financial services because institutions don’t want the hassle of dealing with the US bureaucracy.

Thousands of people now give up their US citizenship each year, up from the couple hundred that used to do so a decade ago before the FATCA law went into effect.

--With assistance from Laura Davison and Aysha Bagchi.