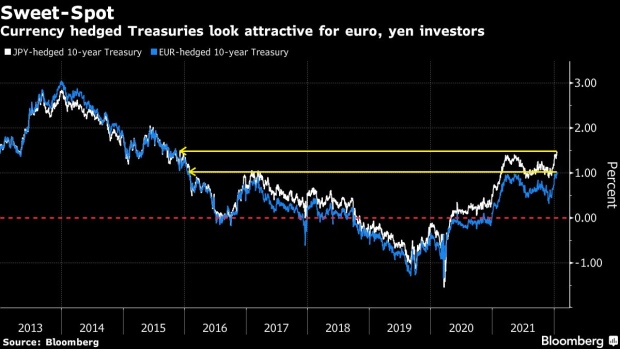 (Bloomberg) -- The clock is ticking on a foreign-exchange-market phenomenon that has made U.S. Treasuries a major draw to foreign buyers looking for bigger yields than they can get at home.

The Treasury selloff since the start of the year has given European and Japanese investors the chance to pick up the highest yields in six years, after currency-hedging costs are taken into account.

But the opportunity may be short-lived: those hedging costs are likely to rise as the Federal Reserve kicks off its expected interest-rate hiking cycle in March. That may drive investors to look elsewhere, shifting cash away from the world’s biggest bond market.

“Higher FX hedging costs for international investors associated with a Fed hiking cycle could, counter-intuitively, encourage flows from Treasuries into spread product, and from single-A into BBB issuers, to achieve a sufficient yield pick-up over local alternatives,” Citigroup Inc. strategist Jason Williams says in a note.

Foreign buyers of U.S. Treasuries typically use foreign-exchange contracts to eliminate the risk that their returns will be wiped out by a drop in the value of the dollar. So the yields for those buyers usually factor in such hedging costs.

Japanese investors are currently picking up a yen-hedged yield of around 1.5% on 10-year Treasuries, the most since late 2015 and well above the 0.13% yield on similarly dated Japanese bonds. Data released this week showed that by the end of November, Japan’s net purchases of Treasury bonds had risen over four consecutive months.

The yield for euro-hedging buyers is around 1%, roughly twice the yield on German bonds.

The calculus may change given that investors usually have the ability to hedge the currency risk for a period of 3 months at the current rate before rolling them into new contracts. And those contracts will be affected by expected moves of the world’s central banks in the months ahead.

Money markets for overnight swap rates are currently pricing in a full 25 basis point rate hike as early as the March policy meeting.