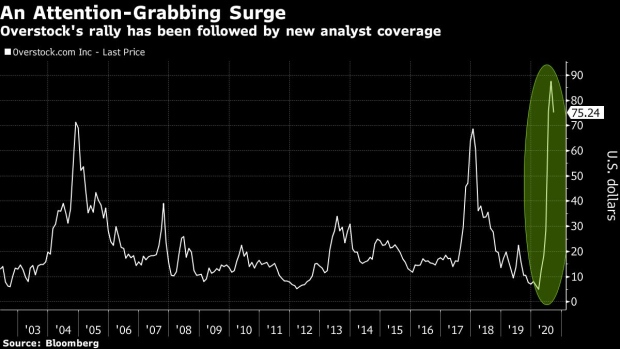 (Bloomberg) -- Overstock.com Inc. is finally receiving some attention from Wall Street analysts, and all it took was a rally of 2,800%.

There has been a flurry of new coverage on the e-commerce company over the past month, with the interest following a massive advance in the stock price. Even with a recent pullback, Overstock has soared during the pandemic, a beneficiary of more commerce moving online.

A month ago, only one analyst -- Tom Forte of D.A. Davidson -- covered the stock, according to data compiled by Bloomberg. Since then, however, there have been at least five initiations of coverage, including three this week.

Shares of Overstock gained 5.1% on Wednesday. While the stock has slumped nearly 40% from an August record, it remains up about 2,800% since March, having jumped from under $3 to about $75.

The latest firm to jump on the bandwagon is Credit Suisse, which issued an outperform rating and $91 price target on the stock. “Overall, we believe the stock offers unique relative value and profitability within the broader e-commerce/retail spectrum,” wrote analyst Seth Sigman. The firm sees “positive internal momentum and favorable external drivers, with positive long-term implications from this growth and incremental customer engagement.”

​Earlier this week, Wedbush forecast “multiple catalysts” for Overstock, “both on the macro and micro level, that we believe can drive continued upside to revenue and Ebitda estimates.” Separately, Needham called Overstock “a compelling growth story with solid momentum.” Both firms issued buy-equivalent ratings, as did Piper Sandler in its own initiation last month.

The only firm to strike a more cautious note was Bank of America, which started coverage with a neutral rating in early September.