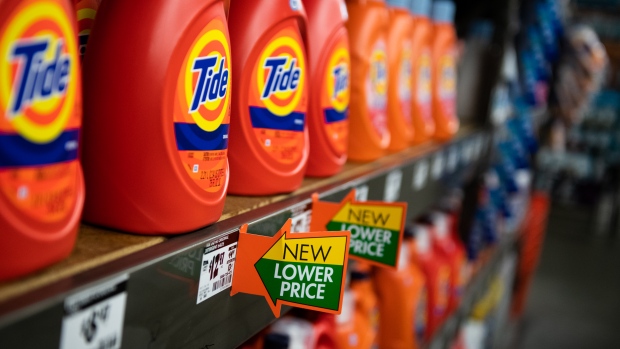 Consumer behavior has changed dramatically during the pandemic. When it ends, shoppers are going to have a hard time letting go of those new habits.

That “stickiness” underpinned stock gains Tuesday as several of the world’s most well-known brands reported soaring sales despite the volatile environment. With people still stocking their pantries and sprucing up their homes, Procter & Gamble Co. had one of its best quarters in years, while grocer Albertsons Cos. and Lysol-maker Reckitt Benckiser Group Plc saw heightened demand as well.

“We do expect that there is some stickiness to new habits that are being formed,” P&G Chief Financial Officer Jon Moeller said on a conference call. “It’s hard for us to see in our interactions with consumers that we’re going to snap back and revert to the same attitudes and the same behavior that we had collectively pre-COVID.”

The comments offer new insight into shopping patterns after the COVID-19 outbreak prompted sharp pullbacks in some discretionary purchases and increased buying of groceries and home goods. Consumers are keeping their homes more fully stocked with items such as disinfectants, packaged food and toilet paper, and this higher “pantry inventory” is one behavior Moeller expects to stay even after the pandemic subsides.

P&G shares climbed 0.6 per cent at 12:23 p.m. in New York, while Albertsons jumped 4.3 per cent. Reckitt Benckiser was little changed in London.

For P&G, the maker of well-known brands such as Tide laundry detergent and Charmin toilet paper, consumer trends are squarely in its favor. With no immediate prospects for a widely available COVID-19 vaccine, that elevated demand should continue, Moeller said.

The company said its organic sales growth, which strips out some items like currency swings, rose 9 per cent in the quarter ended Sept. 30, the best performance since 2005. Its home and fabric care revenue, in particular, surged.

“I don’t see any reason that we shouldn’t be able to sustain strong results,” Moeller said.

The sustained demand for consumer-goods products is also lifting the prospects of grocery stores. Albertsons, which owns chains such as Safeway, reported identical-store sales growth of 13.8 per cent in its latest quarter and boosted its short-term projections. It wasn’t panic-buying or stockpiling that lifted the grocer’s sales, either; rather there was “a lot of steadiness” in the ways consumers are shopping, Chief Executive Officer Vivek Sankaran said in an interview.

The company now expects identical-store sales to rise to 15.5 per cent or more in the current fiscal year. Sankaran said higher spending on groceries is here to stay, and he sees Albertsons “growing from a new baseline” whenever there’s a return to normal.