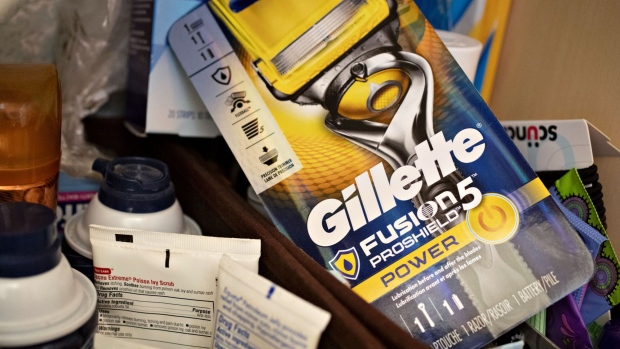 Procter & Gamble Co. rose in early trading after reporting sales for the latest quarter that exceeded expectations despite a difficult comparison with last year’s stockpiling.

The maker of Gillette razors and Downy fabric softener, which announced a leadership transition on Thursday, said that organic sales, which strip out the impact of items like acquisitions and currency swings, grew 4 per cent in the quarter that ended in June, beating the 3 per cent estimate from analysts. Growth was faster than expected in the grooming, health care and fabric and home care segments of the business.

P&G shares rose 1.5 per cent at 8:34 a.m. in New York. The stock’s performance had been flat this year through Thursday’s close.

Nonetheless, the company sees a slowdown coming: P&G is forecasting organic sales growth of 2 per cent to 4 per cent in the company’s current fiscal year, which began in July. That’s down from the 6 per cent advance P&G posted for the previous year -- a period marked by pantry loading as consumers holed up in their homes during the start of the COVID-19 crisis.

The slowing pace will be accompanied by US$1.9 billion in higher expenses, after tax, from freight and materials like pulp and resins. This, coupled with currency variation, is expected to reduce earnings per share by about 70 cents during the year. 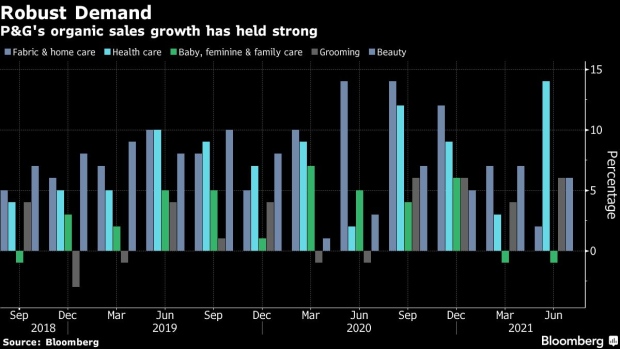 The company expressed confidence in dealing with higher costs.

“Our organization is up to the task of dealing with the commodity inflation,” Chief Executive Officer David Taylor said in a call with media on Friday. “Everybody is experiencing these cost increases, so then it gets down to who can perform the best and has the strongest portfolio. We’re well-positioned.”

Peers across the industry, from Church & Dwight Co. to Colgate-Palmolive Co., are reporting a sharp rise in costs related to raw materials and freight -- adding a new dimension to the companies’ competition for share of consumers’ wallets.

“The guidance nods to P&G’s scale and enhanced agility and highlights its cost-saving strategies, given the company is facing a US$1.9 billion commodity-and-freight headwind -- a 70-cent hit to 2022 EPS. Jon Moeller is a good fit to replace David Taylor.”

For now, shoppers are showing little sign of being deterred by rising prices, especially in the U.S. But further price increases may test how far they’re willing to stretch their wallets. The dynamic represents a challenge for Jon Moeller, who will take over the top role from Taylor later this year.

P&G expects price increases to go through in its second quarter, or the end of the calendar year, as it digests the surge in costs. The company has already announced hikes for baby, feminine and adult-incontinence products and midtier laundry brands such as Era.

The higher prices coincide with economies that are reopening and demand for some hygiene products that Chief Financial Officer Andre Schulten said is “leveling off a little bit.”

Even so, a post-COVID environment with fewer masks and better mobility could still bode well for P&G. The trends helped the grooming business, which saw organic sales jump 6 per cent as shaving rates increased. The company also saw an increase in its oral care segment, which includes Crest toothpaste and Scope mouthwash.