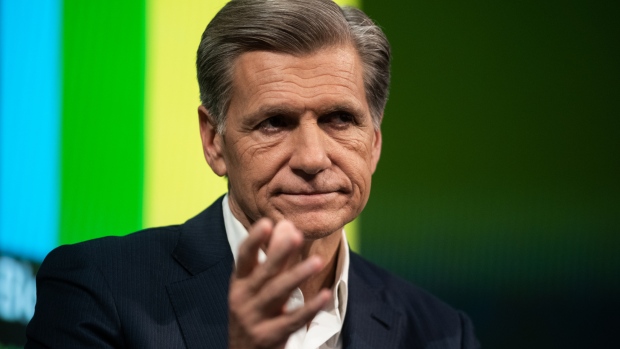 Marc Pritchard, chief brand officer of Procter & Gamble Co. (P&G), pauses while speaking during the Bloomberg Business of Equality conference in New York, U.S., on Tuesday, May 8, 2018. The conference brings together business, academic and political leaders as well as nonprofits and activists to discuss the future of equality, how we get there and what is at stake for the economy and society at-large. Photographer: Mark Kauzlarich/Bloomberg , Bloomberg

Procter & Gamble Co. (PG.N), one of the most important advertisers for Google and Facebook Inc., ramped up criticism of internet platforms, saying the problems plaguing the industry aren’t getting fixed fast enough.

In a speech at an industry conference Thursday, P&G Chief Brand Officer Mark Pritchard blasted the digital media industry for lack of transparency, fraud, privacy breaches and a proliferation of violent and harmful content placed next to ads. He said his company, which spends billions of dollars on marketing products from paper towels to shampoo every year, would move its money to services that can guarantee effectiveness, are completely free of offensive content and are more willing to share consumer data with advertisers.

“We’ve been tolerant for too long,” Pritchard said in prepared remarks. “It’s not acceptable to have brands showing up where Opioids are being offered, where illegal drugs are promoted, where abhorrent behavior is present or where violence is seen. The apologies are heartfelt and appreciated, but that’s not good enough.”

Pritchard asked other advertisers to join him in creating a “new media supply chain” for the industry. “Let’s all step up.” he said.

Pritchard didn’t mention any companies by name, but this isn’t the first time P&G has criticized internet platforms. The company boycotted YouTube for more than a year in 2017 and 2018 after its ads showed up next to terrorist content. Other consumer-conscious companies like Walt Disney Co. and Kellogg Co. have paused spending on Google’s video site at various times over similar concerns.

But the boycotts haven’t hit Google or Facebook’s revenue in a serious way. And though Pritchard said he would look to spend more money on TV, radio and outdoor ads like billboards, it’s unlikely advertisers will ditch online platforms en masse. The scale and affordability of Google and Facebook are unrivaled by any other ad form. Spokespeople for Facebook and Google did not immediately return requests for comment.

Pritchard also brought up a key point of friction in the industry. He wants the ad platforms to use a standardized way of identifying individual consumers, so that advertisers can track people as they move across the internet and make sure they’re not repeatedly hitting a consumer with the same ad. But as privacy becomes a bigger concern for people and governments, Facebook, Google and others have used it as a reason to make it even more difficult to do that kind of tracking. The added privacy makes it harder for advertisers to send pinpointed messages to people, increasing their costs and annoying consumers who get hit with the same ad over and over again.

Google, Facebook and others have been working hard to cut out problematic content before it even gets posted to their systems. They’ve both hired thousands of human moderators and developed advanced artificial intelligence to read a video, text post or image before it goes live to determine its content and block it if necessary. But it’s a difficult task, even for the tech giants.

The companies have apologized and promised to do better, sometimes adding that not many people see the content that gets picked up in the media.

“That’s not the point,” Pritchard said. “The point is, the kind of objectionable content that’s still showing up should never be present on any media platform where brands like ours are present.”