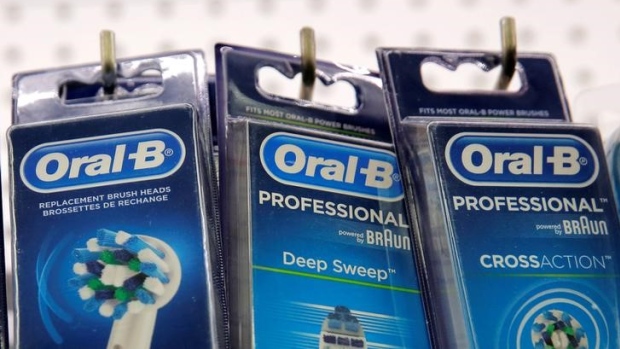 The world's largest consumer goods maker Procter & Gamble Co (PG.N) reported better-than-expected sales and profit for its second quarter on Tuesday, but investors focused on a drop in gross margins, sending its shares down two per cent.

Margins fell by nearly one per cent in the quarter, hit by higher commodity costs, investment outlays and cuts in prices in the grooming business that includes Gillette razorblades.

The company has just quelled activist investor Nelson Peltz's attacks on its strategy by offering him a board seat but is struggling to boost Gillette sales against cheaper competitors like Unilever's (UN.N) Dollar Shave Club.

It has reduced prices on the shaving products, upping volume growth but eating into profits and headline revenue from one of its biggest businesses.

Some of that was offset by its efforts to pour more money into other lines including beauty and health care, leading to a two-per-cent increase in organic sales.

Analysts, however, characterized the results as mixed and stopped short of predicting any upside for P&G shares after a rally spurred by the proxy fight with Peltz.

"Second quarter was not a quality beat, with gross margin lower than expected, and little near term benefit from the Tax Act," Wells Fargo analyst Bonnie Herzog wrote in a note.

The company said it was doing all it could against a social media fad that has teenagers daring each other to eat its Tide Pods laundry detergent live on video.

"We're going to have to work with the broader part of society to address that."

P&G raised its full-year adjusted earnings per share growth forecast to five to eight per cent from five to seven per cent as it expects a US$135 million net benefit from the recent U.S. tax overhaul, which sees corporate taxes falling to 21 per cent.

The company said the drop reflects a net charge of US$628 million it took related to the tax overhaul and a gain it incurred from the sale of a chunk of its beauty brands to Coty Inc in the same period last fiscal year.

Excluding items, the company earned US$1.19 per share, including a five-cents-US benefit from the tax changes. Analysts had expected US$1.14 per share, but several Wall Street brokerages said those estimates did not account for the tax benefit.

Net sales rose three per cent to US$17.4 billion, boosted by strong Demand for Olay skincare products and its high-end SK-II brand and brisk sales of Oral-B toothbrushes as well as Vicks cough and cold products in a colder-than-usual winter season.