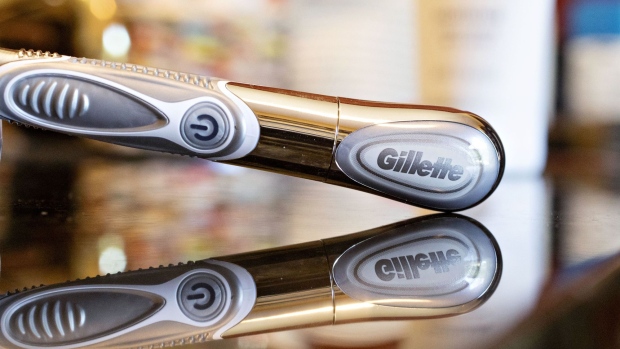 A Procter & Gamble Co. Gillette Fusion 5 Proshield Power brand razor is arranged for a photograph in Tiskilwa, Illinois, U.S., on Tuesday, July 30, 2019. Procter & Gamble reported its best quarter of organic sales in more than a decade, with shoppers snapping up its beauty and health-care products in particular, even as its shaving segment took a hit in some regions, including an $8 billion charge. Photographer: Daniel Acker/Bloomberg , Bloomberg

(Bloomberg) -- Procter & Gamble Co. shares rose on the back of sales growth that beat analyst expectations, helping to counter a sustained increase in costs.

Organic revenue growth, a closely watched metric that strips out some items, was 10% in the fiscal third quarter that ended March 31, P&G said in a statement Wednesday. Higher sales were driven by price hikes, and to a lesser extent an increase in shipment volumes and a shift toward higher-priced products and geographical markets, the company said.

The maker of Charmin toilet paper and Gillette razors raised its forecast for full-year sales growth while also warning that higher expenses will take a bigger bite out of its profit. Inflation for commodities such as energy and plastics has only worsened since the company last reported earnings in January, and P&G said it now expects $3.2 billion in extra costs this fiscal year tied to commodities, freight and foreign exchange, $400 million more than its prior guidance. About half of the increase is tied to commodity prices, and much of the hit will come in the current quarter.

“If we look at the current situation in the market -- imbalance between supply and demand, geopolitical disruption, need to restructure supply chains, higher energy costs due to conflict in Ukraine -- all of those impacts will continue to put pressure on the cost side,” Chief Financial Officer Andre Schulten said on a call with reporters.

Schulten said he expects the pace of cost increases to moderate. For the current fiscal year ending in June, P&G now sees full-year core earnings per share growth of 3%, at the low end of its prior view of 3% to 6% growth, due to increased expenses and foreign-exchange challenges. Organic revenue growth is now projected to be 6% to 7% for the year, up from an earlier projection of 4% to 5%.

So far, consumer demand relative to P&G’s price increases has been 20% to 30% more favorable than history would suggest, Schulten said. He expects the volume of products being sold will face more pressure as prices rises, but he says P&G is in a good position overall given the strength of its portfolio.

P&G’s health-care business was the biggest sales driver in the third quarter due to a stronger cough, cold and flu season versus the prior year, as well as innovation in sleep and digestive products, the company said.