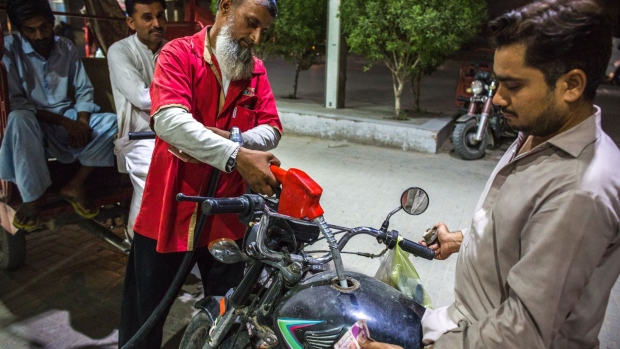 A worker fills a motorcycle at a fuel service station in Jacobabad, Pakistan, on Thursday, May. 26, 2022. Climate change made the extreme temperatures that baked north-west India and Pakistan in April and May over 100 times more likely and also increased the chances that such heat waves will occur more frequently by the end of the century. , Bloomberg

(Bloomberg) -- Pakistan proposes to impose a “super tax” on key industries including cement, beverages, chemicals, steel and tobacco to boost revenues, as the South Asian nation holds talks with the International Monetary Fund for a bailout.

The announcement was made by Prime Minister Shehbaz Sharif in a televised speech on Friday. Local authorities have so far raised fuel prices, power tariffs, taxes and have unveiled austerity measures to meet the lender’s requirements. Funds from the IMF will help avert a potential default, and pave the way for more aid from other multilateral institutions and friendly nations. Pakistan needs at least $41 billion in the next 12 months to repay debt and fund imports.

Pakistan’s economy is grappling with deteriorating finances amid surging commodity costs and rising imports. Pakistan’s foreign exchange reserves have fallen below $10 billion, enough to cover less than two months of imports. Its headline inflation has quickened to the highest level in more than two years in May, while its currency is down about 17% this year.

Pakistan’s plan to trim its deficit by slashing spending may not be enough to convince the International Monetary Fund to resume its loan program, Citigroup Inc. economists said earlier this month.