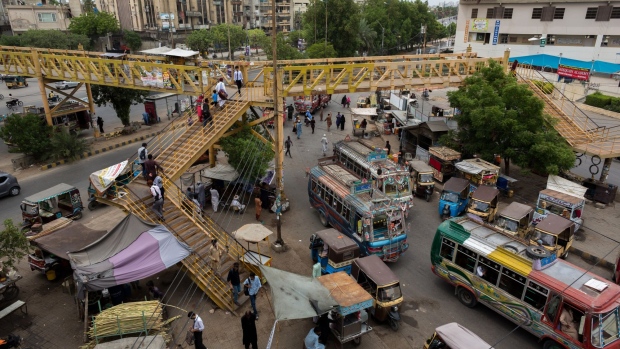 People cross over a pedestrian bridge under a traffic junction in Karachi, Pakistan, on Thursday, June 30, 2022. Pakistani government has increased gasoline prices by 14.83 rupees/liter to 248.74 rupees/liter effective July 1, the Pakistan Finance Ministery said in a statement. The levy imposed as one of prior actions set by the International Monetary Fund to to revive its loan program, Pakistan Finance Minister Miftah Ismail says at news conference. IMF to extend its bailout program to four years and enhance its funding by $1b to $7b. , Bloomberg

(Bloomberg) -- Pakistan’s headline inflation accelerated in June amid higher food and fuel costs even as the nation closes in on a International Monetary Fund bailout.

Consumer prices rose 21.32% last month from a year earlier, according to data released by the government Friday. That compares with a median estimate for a 17.9% gain in a Bloomberg survey of economists and a 13.8% acceleration in May.

The price gain in June could further complicate matters for the country’s central bank that will meet July 7 to review interest rates. Pakistan’s central bank has raised rates by 400 basis points since the beginning of the year to tame rising prices.

A surge in global commodity prices, falling currency and rising import bill has contributed to Asia’s second fastest inflation. Pakistan’s administration has raised domestic fuel prices by up to 92% in a month to meet the IMF’s requirements.

Pakistan is looking to secure funding from other lenders to boost its foreign exchange reserves after the revival of IMF program. The country needs about $41 billion in financing for the fiscal year starting July.