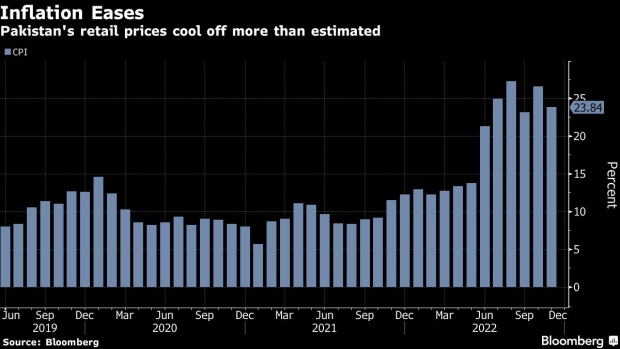 Traffic and pedestrians pass shops and market stalls illuminated by solar-powered bulbs in Jacobabad, Pakistan, on Thursday, May. 26, 2022. Climate change made the extreme temperatures that baked north-west India and Pakistan in April and May over 100 times more likely and also increased the chances that such heat waves will occur more frequently by the end of the century. , Bloomberg

Consumer prices rose 23.84% in November from a year earlier, according to government data released Thursday. That compares with a median estimate for a 24.55% gain in a Bloomberg survey and a 26.56% jump in October.

The easing comes as Pakistan’s monetary authority resumed its rate hikes last month to prevent faster-than-anticipated inflation from spiraling out of control. State Bank of Pakistan has delivered 625 basis points of rate hikes this year taking its target rate to 16%.

“Although headline inflation softened, core inflation continued to surge on a monthly basis, rising by more than 1% for a sixth consecutive month,” said Fahad Rauf, head of research at Ismail Iqbal Securities Pvt Ltd. in Karachi. “Core inflation continues to be the central bank’s focus and will be critical in policy decisions.”

Rauf expects consumer prices to remain at current levels over the next few months and inflation to average 23.5%, slightly higher than the central bank’s range of 21%-23%, which was revised upward last week.

Pakistan is facing multiple economic challenges including the deterioration in foreign exchange reserves that cover only about one month worth of imports, making debt repayments difficult.

Talks with the IMF for the next loan tranche are delayed as the nation evaluates how much it will spend this year to rebuild the country after the devastating floods.

(Updates with analyst comment in seventh and eighth paragraphs)