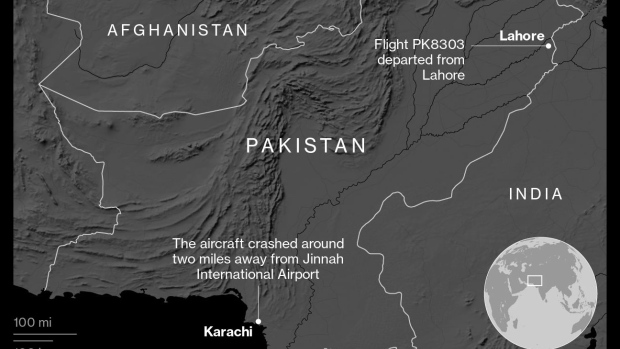 (Bloomberg) -- It was supposed to be another regular flight on one of Pakistan’s busiest domestic routes between its two biggest cities.

State-run Pakistan International Airlines Corp.’s PK 8303 flight had a normal departure from the eastern city of Lahore. Close to landing before 2:45 p.m. local time, the pilots told passengers to fasten their seat-belts as it approached Karachi’s airport in a flight that usually takes less than two hours. Everything was fine -- until the last few seconds.

The plane began its descent. Instead of gliding on the runway, it hit the ground a few times -- for about 20 to 30 seconds -- before the pilots pulled the plane back up into the air again. It reached a maximum altitude of 3,175 feet about two minutes later, based on data by FWIW, the Flightradar24 website that tracks aircraft.

The pilots did a go-around, kept the plane in the skies for about 10 to 15 minutes, before announcing a second attempt to land. The last recorded position captured by Flightradar24 ground stations was about 5 1/2 minutes after the initial touchdown. The plane was at an altitude of 525 feet.

Calls for help were heard at the airport control tower.

“Sir, we have lost engines,” the pilot said to a controller, according to a recording from LiveATC.net, which collects audio feeds from air-traffic staff. About 30 seconds later, the pilot again radioed a distress call: “Mayday. Mayday. Mayday.”

The Airbus SE A320 jet with 99 people on board continued its descent, smashing through rooftops of houses before finally crashing into a narrow lane of the residential area miles away from the airport that the runway was possibly in sight.

“After the crash, there was fire everywhere, you could not see anyone,” said Muhammad Zubair, a survivor from the plane crash that killed 97 people. “I opened my seatbelt, and headed towards the light.”

Zubair recounted the final moments before the accident to a local television channel. He was seated in the eighth row while the only other survivor, Zafar Masud, who’s the president of Bank of Punjab Ltd., was seated in the first row, various local news outlets said.

Rescue workers entered the homes, recovered bodies from rooftops and also the crash site as smoke gathered in the area. Some bodies recovered had oxygen masks on, indicating that an emergency had been declared while the plane was in the air, according to rescue agency Edhi, Pakistan’s largest ambulance service.

Edhi was first alerted by eyewitnesses, and said more people may have survived if it got the call to be on standby the minute the aircraft reported a problem, a practice that was followed in the past.

“We were confused when people from the area called us,” Ahmed Edhi, a spokesman for the rescue agency, said by phone. “If they told us beforehand, many of our ambulances would have reached close to the airport before the crash.”

The crash spread chaos and panic throughout the city that had already seen its health-care system chocked up by the coronavirus outbreak.

Few TV channels initially offered hope about survivors, which led Usama Qureshi and a few friends to be on the road for eight hours until midnight, going from hospital to another. They waited along the footpaths of the main hospital as one ambulance after another brought bodies from the crash site, hoping to find the more than half a dozen people they knew who were on the flight.

The first few bodies brought in from the crash site could be identified by families. “But after 15 to 20 ambulances, the condition got worse, it became very painful to see,” Qureshi said in an interview by phone. “I could not see anymore and thought I would just faint.”

The mortuary at the hospital was at full capacity, and about a dozen ambulances with bodies from the crash were lined up outside, said Qureshi, co-founder of an engineering company Bolts Pvt.

Among the people he was looking for was his friend Zain Polani, a banker who was on the flight with his wife and kids. He was also looking for the family of his former colleague.

Some of the bodies have still not been identified a day and a half after the crash. That’s a pain point for families emotionally as it’s a common practice to hold final funeral prayers within hours or a day of death in Pakistan.

“The families who have lost lives want to know what happened,” Pakistan’s Aviation Minister Ghulam Sarwar Khan said in a Karachi press briefing on Saturday. “We will make the report public as soon as soon as possible.”

Pakistan has set up a four-member panel, which will submit its report on the disaster in three months, Khan said in a televised briefing. Pakistani authorities have found the flight data recorder of the airliner that crashed into the residential neighborhood but the search for the cockpit voice recorder is ongoing, Abdul Sattar Khokhar, a spokesman for the nation’s Civil Aviation Authority, said by phone.

The carrier’s Chief Executive Officer Arshad Malik said in a briefing the aircraft, which first entered service in 2004, passed all tests before the flight and went through a major check in March.

It was supposed to be another regular flight a day later. But not for market professional Arif Iqbal Faruqui, who lost his wife and three daughters in the crash. On board the same flight after the accident, a noise was heard, prompting fears from nervous passengers -- moments he captured on his phone.

“The aircraft is showing problems,” Faruqi said in the video. “Passengers are tensed. A few have stood up and said they don’t want to go. Still they are insisting to take us.”

The plane safely landed in Karachi.