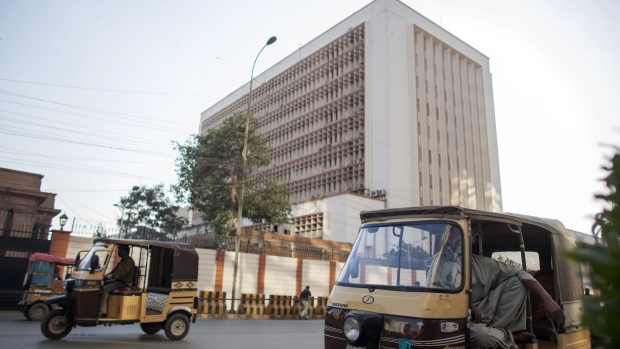 Auto rickshaws travel past the State Bank of Pakistan building in Karachi, Pakistan, on Thursday, Dec. 14, 2017. Pakistan's rupee weakened to a record low after the central bank continued to ease its grip on the currency amid mounting economic pressure and speculation that the country may need International Monetary Fund support. Photographer: Asim Hafeez/Bloomberg , Bloomberg

(Bloomberg) -- Pakistan appointed a former central banker to head the monetary authority as the nation contends with one of Asia’s fastest inflation rates and faltering foreign-currency reserves.

Jameel Ahmad, a former deputy governor will now head the State Bank of Pakistan for a term of five years, according to a statement of the finance ministry. He will replace Murtaza Syed, who was the interim chief since early May.

Ahmad takes on the role against the backdrop of a precarious political setting and funding uncertainties. The new governor faces the task of reining in the fastest inflation in 14 years due to soaring energy costs while shoring up foreign-exchange reserves that have fallen below $8 billion, a level that covers less than two months worth of imports.

The central bank, which has already raised interest rates by 525 basis points this year, meets again on Aug. 22 where six of nine economists in a Bloomberg survey as of Friday expect the policy rate to be kept at 15%.

Ahmad has spent more than three decades in the monetary and financial sector and once held a senior position at the Saudi Central Bank. His association with the State Bank of Pakistan dates back to 1991 in various capacities where he was instrumental in pushing for digitalization and financial technology, according to his profile on the central bank website.

He contributed significantly in formulating the policy and regulatory framework for the banking systems of Pakistan and Saudi Arabia, it said.

In his return to Pakistan’s monetary authority, he’s counted on to counter inflation, boost reserves and help resolve the country’s funding crunch. Price gains are forecast to range 18% to 20% for the rest of the year after accelerating to almost 25% last month.

Pakistan is expecting the International Monetary Fund that’s scheduled to hold a board meeting later this month to release a $1.2 billion financing shortly after. The nation has also secured $4 billion pledges from friendly nations like Saudi Arabia, Qatar and the United Arab Emirates to fill its financing gap, according to finance minister Miftah Ismail.

As a result, the rupee has regained some strength against the dollar and the benchmark stock index has also recovered.

(Updates with background on new governor in fifth paragraph.)