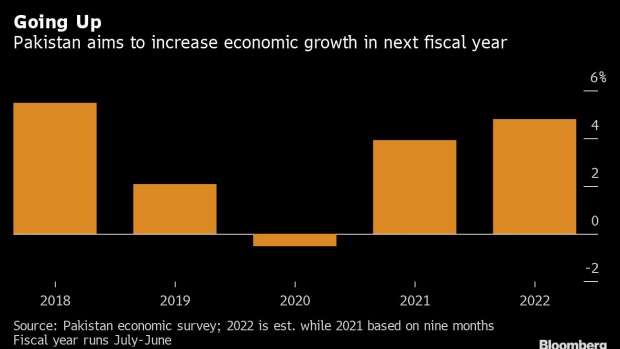 (Bloomberg) -- Pakistan plans to spend its way out of the pandemic-induced slump, with a new budget that seeks to put more money in the hands of people and boost economic activity.

The federal government proposes to raise salaries of government employees by 10% in the year beginning July 1, Finance Minister Shaukat Tarin said in his budget speech in Islamabad on Friday. Taxes on some equity as well as banking transactions will be pared or abolished, he said.

The giveaways notwithstanding, Tarin targets to narrow the budget gap to 6.3% of gross domestic product from 7.1% of GDP this year, less than 1 to 1.5 percentage points the minister estimated last month.

The budget is an opportunity for Tarin to strengthen Pakistan’s fragile economy, which is currently under a $6 billion bailout program from the International Monetary Fund. A drop in coronavirus cases is allowing the nation to reopen slowly, paving the way for demand to kick in.

The South Asian nation forecast a GDP growth of 4.8% for the next fiscal year, compared with an estimated 3.9% this year. The nation, which recorded a rare GDP contraction last year, targets to achieve a growth of 7% in the next two years, Tarin said.

“It is a spending-led confidence building budget exercise,” said Mohammed Sohail, chief executive officer of Topline Securities Pakistan. “The biggest challenge will be to deal with IMF and rising commodity prices.”

Here are some key proposals from the budget: