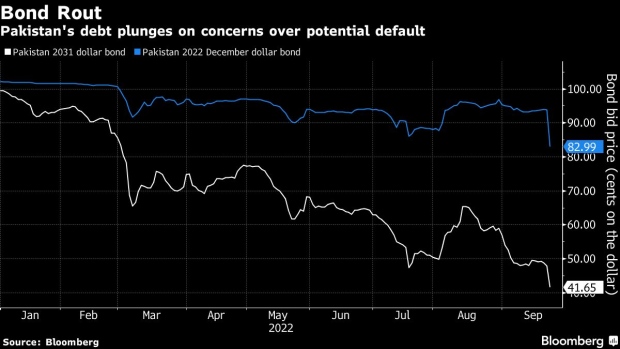 (Bloomberg) -- Pakistan’s dollar bonds fell by the most on record after Prime Minister Shehbaz Sharif appealed to rich nations for debt relief as the country grapples with the aftermath of catastrophic floods.

The country is among a host of emerging- and frontier-market nations struggling to service heavy debt as their currency weakens against the US dollar and borrowing costs rise. Its predicament has been worsened by climate change exacerbated flooding that has displaced millions and killed more than 1,500 people.

United Nations Secretary General Antonio Guterres has called on the international community to help Pakistan financially as damages caused by the floods exceed $30 billion. Prime Minister Sharif warned that “all hell will break” unless the nation receives “substantial relief.”

“The market was expecting the 2022 bond will be paid, but these comments imply that there is a strong risk of a restructuring or default,” said Abdul Kadir Hussain, head of fixed income asset management at Dubai-based Arqaam Capital Ltd., which holds the note. “I’m not sure that was the intended consequence of the PM’s comments but that’s how the market has interpreted it.”

Pakistan will not default on debt obligations despite the floods, Reuters reported Finance Minister Miftah Ismail as saying earlier this week.

The rupee is trading close to a record low against dollar, as billions of dollars in promised aid from the Middle East to bolster the hard-hit nation’s finances is yet to arrive. Pakistan’s South Asian neighbor Sri Lanka is already in the process of negotiating a debt restructuring, with a presentation to creditors scheduled Friday.