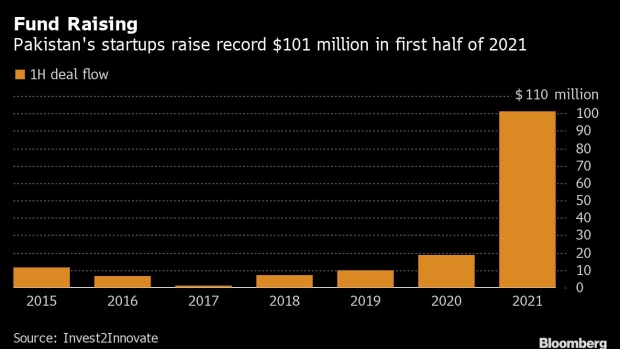 (Bloomberg) -- Wemsol Pvt., known as Keenu, is looking to raise as much as $5 million from the International Finance Corporation that would extend a record fundraising spree by Pakistan’s startups.

The Karachi-based company, which makes point-of-sale debit and credit card machines, will use the money to expand its network, Chief Executive Officer Syed Ejaz Hassan said in an emailed reply. The company is also planning to create consumer and merchant wallets and will seek a license from the central bank, according to Numero Advisors, arrangers to the transaction.

Pakistan’s startups have raised a record $101 million in the first half of this year compared with $65.6 million in the whole of 2020, with most going to e-commerce and financial technology firms, according to a tracker from venture capitalist fund Invest2Innovate. The South Asian nation has the third-largest unbanked adult population globally, with about 100 million adults without a bank account, according to World Bank data.

IFC’s board will consider the investment proposal by end-August, the World Bank’s finance arm said by email. It added that the project would help Keenu expand its network toward small businesses.

Keenu is the only non-bank in the point-of-sale-space, with about 10,000 machines or 30% of total market share, according to Numero Advisors.