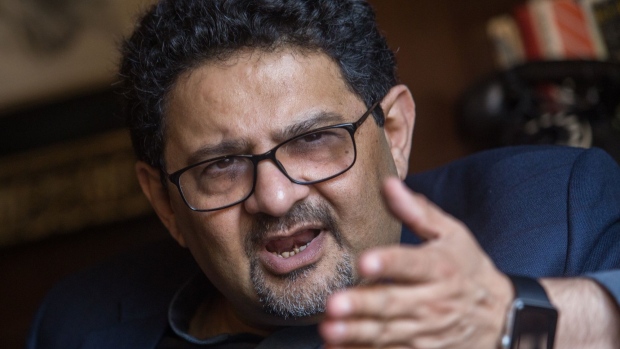 Miftah Ismail, Pakistan's finance minister, speaks during an interview in Karachi, Pakistan, on Saturday, Sept. 3, 2022. Ismail wants to break a boom-and-bust cycle that’s played out for decades, and help the nation to finally learn to live within its means. Photographer: Asim Hafeez/Bloomberg , Bloomberg

(Bloomberg) -- Pakistan is seeking debt relief from bilateral creditors and not from commercial bondholders, Finance Minister Miftah Ismail said hours after comments from the nation’s premier roiled its dollar bonds.

The South Asian country will repay on time its $1 billion sovereign bond due in December, Ismail said by text message in response to Bloomberg queries. A large portion of debt is in the form of deposits from “friendly countries” who have promised to roll them over, he added.

“We are seeking debt relief from the Paris Club’s bilateral creditor countries, just as it was done during” the pandemic, Ismail said. “We are not seeking, nor do we need to seek, any relief from our commercial bank debt nor from Eurobond debt.”

Dollar notes due in 2031 trimmed losses after Ismail reiterated the nation’s commitment to repay bondholders. The comments follow those from Prime Minister Shehbaz Sharif who, in a Bloomberg interview, made an urgent appeal for debt relief from rich nations as catastrophic floods exacerbated by climate change displaced millions of citizens. Separately, the Financial Times cited a draft UN policy paper as saying that Pakistan should seek to suspend international debt repayments and restructure its loans.

Pakistan’s dollar bonds due in 2022 and 2031 fell by the most on record after Sharif’s statement. Pakistan’s rupee is among the worst performers against the US dollar globally this month and is trading close to its record low.